Aziz Ansari and Alan Yang, Pushing the Envelope on Diversity and Inclusion in Hollywood 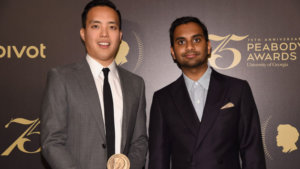 Beverly Hills, Nov. 18 – At the 2017 Media Access Awards, which honor individuals who are showcasing the disability narrative, Aziz Ansari and Alan Yang received the 2017 Writers Guild of America, West, Excellence in Writing Award.

While they were not present to accept their awards, attendees witnessed their efforts to push the envelope on diversity and inclusion.

Yang and Ansari are the co-writers and co-creators of the hit Netflix series, Master of None. The series speaks to the true experiences of people like Yang and Ansari, who are first generation Asian-Americans, whose parents dealt with hardship both before and after coming to the United States. Master of None stars Ansari as a 30 year-old Indian-American actor who struggles to find parts in an industry that still lacks cultural diversity, despite its recent improvements.

Shah mostly has his life together at the point where the series begins—he has a good relationship with his family, he makes a living and he acts maturely, overall. However, he still struggles with his life decisions, as most typically do in their early 30’s. Netflix first released the show in 2015 and the second season was released in early 2017. In the second season, Shah and Yang take their already-diverse cast to a whole new level in an episode called, “New York, I Love You.”

This episode provides a break from the main storyline, which orbits around Shah, and temporarily explores three subplots of other New York City residents including Maya, a deaf woman who is a cashier, and is played by an actress who is deaf, Treshelle Edmond. All of Maya’s subplot is silent—no speech, no background music, no sound at all. This helps immerse hearing viewers into Maya’s experience fully. When people who can hear try to communicate with Maya, there are no words on the screen, so they have to try and decipher what the hearing character is saying just as much as Maya does.

“The effect is that, hopefully you put yourself in the character’s shoes for a second, and it makes you lean in and pay attention, as opposed to just letting it go by while you check your phone,” Yang told CNN.

Yang and Ansari’s discussion of the episode speaks to diversity—in all forms—race, ability, socio-economic status, etc. Yang emphasizes that Hollywood historically tells the same pattern of stories about the same types of characters. This leaves a lot of actors out of the game, and a lot of stories untold.

“I think one of the ideas we want to get across is that everyone’s the star of their own story and no one is a background player in the movie of their own life,” Yang told CNN.

Read the profile of Treshelle Marie Edmond awarding Aziz Ansari and Alan Yang with the award on our website: https://www.respectability.org/2017/11/18/asl-performer-treshelle-marie-edmond-presents-award-at-media-access-awards/.