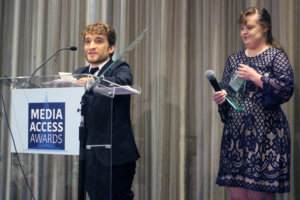 The MAAs shines the spotlight on actors, producers and directors who are showcasing the disability narrative in a positive, accurate way.

“His name is a known name in this industry,” Brewer said as she teed up to tell the audience who the recipient of the 2017 SAG-AFTRA Harold Russell Award was. 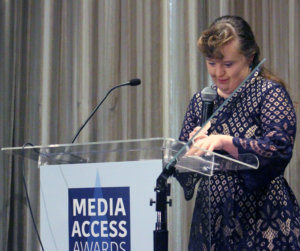 Currently she is starring on Amazon Prime’s Love You More, which includes nine characters with Down syndrome who are played by individuals with Down syndrome. This is an important distinction to make when discussing representation of people with disabilities in Hollywood. All too often people without disabilities are chosen to play roles of characters with disabilities. Additionally, the fact that these characters have Down syndrome does not dominate each individual character’s plot line, which often is the “norm” when the disability community is portrayed on television. Reviewers on Amazon are giving the show a 4.7 out of 5 stars referring to it as “hilarious” and “heartfelt.” Love You More is available for streaming on Amazon Prime Video.

Brewer herself is a successful actress with Down syndrome who also previously has been honored at the Media Access Awards. In 2014, she received the Producers Guild of America George Sunga Award for her continued presence as not only an actress but also an activist for people like herself.

Brewer is the first model with Down syndrome to walk in New York Fashion Week and is the youngest person to be nominated for the role of president of her local ARC governmental organization in Texas. Additionally, she helped to persuade Texas Senators to abolish the word “retarded” from all state legislation.

Brewer is making history and she is only 32 years old.

Previous: Aziz Ansari and Alan Yang, Pushing the Envelope on Diversity and Inclusion in Hollywood

Next: Nic Novicki: Creating Change from Within