Telling a Compelling Story of Something You Overcame 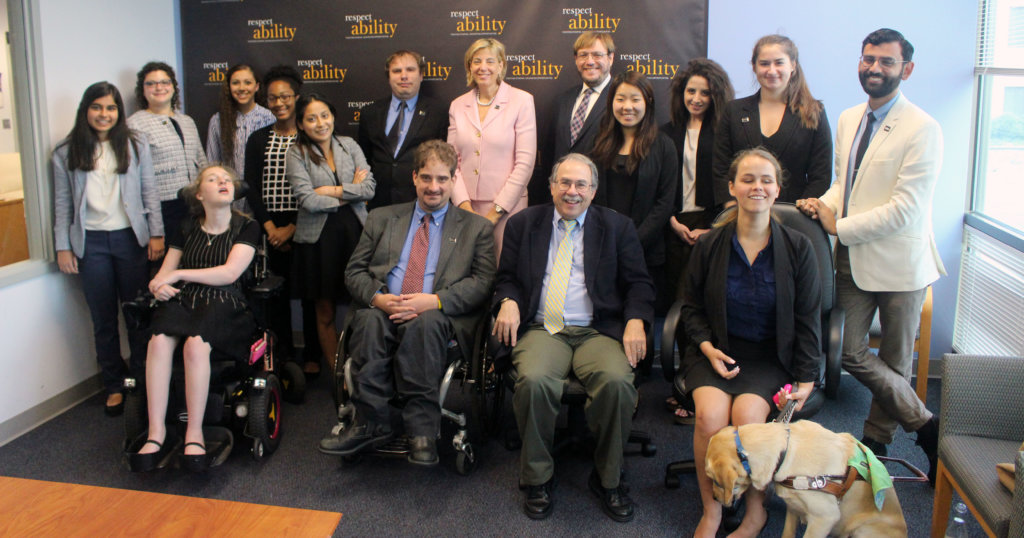 Rockville, Md., Sept. 24 – “What is really a news story?” asked Jonathan D. Salant, an award-winning political and investigative reporter who graduated from Columbia University Graduate School of Journalism. He posed this question to a group of Summer Fellows at RespectAbility, a nonprofit fighting stigmas and advancing opportunities for people with disabilities.

Salant is the Washington correspondent for NJ Advance Media serving NJ.com and The Star-Ledger. His connection to disabilities developed at a younger age when his mother became the founder of a school for children with disabilities in Long Island.

Salant was the former president of The National Press Club (NPC), also known as “The Place Where News Happens.” NPC began 100 years ago as a place for male reporters to get together after work to socialize. Now it is a place to receive training and a gathering spot for social activity. Two to three times a week, national figures are invited to address the NPC during a luncheon that airs live on C-SPAN.

“There is a perfect, great saying in journalism: If dog bites man, that’s not news, but if man bites dog, it is news. You are looking for something interesting,” he said.

His advice? Get something that will attract attention. Make it interesting and point out the difference. Get a strong angle: celebrities is one; Democrats and Republicans teaming up is another.

He said it is necessary to ask: “Why would people care about it? Why would someone want to cover it?”

When covering a local story, get directories and notify newspapers you are coming to town, Salant added.

Know your audience, who you are pitching it to and who will want to read it, he advised. Call the paper locally when there is an interesting event going on in the area, depending on what people are interested in. Sometimes it is hit or miss, so tell a compelling story.

Salant used an example of a story he covered when he was an undergraduate student at Stony Brook University. He wrote about his experience trying to get around the campus, needing accommodations when he ended up using crutches and a wheelchair after an accident.

Angles like that make a good story, he said, adding, people with a diverse background make compelling stories. Think of things that will be interesting or issues that could be wrong such as the things people take for granted.

Facts and figures never covered before are good to include in a news story. When pitching a story, Salant says to answer the question: “Why should I care?”

Stories About Your Own Disability

If you want coverage, then a way to tell a compelling story would be by sharing how your disability has not stopped you from doing anything you want to achieve, Salant stressed. A story becomes more interesting because of a disability by making you different than someone else advocating. Having a disability and advocating is what distinguishes you from others who do not have a disability, he said.

Salant said that if media is used correctly, it has a lot of authority and access to create change. A reader with a disability, he said, may feel personally inspired by reading about your successes.

Salant also suggested using social media as a means to get your story out, especially when editors refuse to publish a story.

He said that both journalists and advocates can work together to educate people, gently corrected them when it comes to things like correct language, like people with disabilities instead of the handicapped.

“Language is such a powerful thing,” said Salant.

The idea is to be sensitive to the other person and call them the way they want to be called. People are becoming very sensitive and learning not to stereotype but it can continue to evolve when you meet people and learn from them. For example, Salant said he learned that if you are standing up in front of a person in a wheelchair, they feel uncomfortable so it is better to sit down while talking to them.

It is up to you and up to everyone to educate people when using inappropriate words to identify a person with a disability. The more people educate others, such demeaning words become more unacceptable.

“Learn they are just like you and me,” said Salant.

Marisela Rivera is a Communications Fellow. She is a first-generation Latina graduate from The City College of New York. She is an environmentalist who is an animal rights and disabilities rights advocate.