Disability Pride On The Rise Among Candidates for Public Office

Having a disability in government has typically meant concealing, masking, or otherwise hiding any difference of mind or body on the campaign trail and in office. Franklin Delano Roosevelt remained paralyzed from the waist down after a bout of polio. Roosevelt used a wheelchair and leg braces for mobility, which he tried to conceal in public. 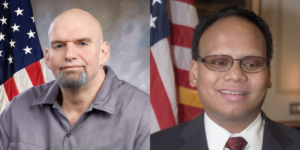 While government roles have been filled by people with disabilities before and after Roosevelt, people running for public office have rarely felt comfortable revealing their disability status. Thankfully, there are signs that this is starting to change. Only days prior to the Pennsylvania Democratic primary, John Fetterman had a stroke. Fetterman proceeded to win the Senate seat despite the public nature of his disability. He embraced the use of accommodations and used closed-captioning technology, which translates audio into text on a screen in real time. Additionally, the Chairman of RespectAbility’s Board of Directors and Los Angeles City Council District 4-elect, Ollie Cantos VII, described himself as “blind since birth” on his campaign website.

Fetterman and Cantos are far from the only disabled people who were elected in 2022. To bring attention to disability representation in office, NCIL launched its Database of Candidates with Disabilities to track candidates for elected office who identify as having a disability. With data, we can begin to build a more complete picture of the representation of people with disabilities in public office. Below are the candidates with disabilities who won their races in 2022.

Adina Faye Karten is a Policy Apprentice in RespectAbility’s National Leadership Program for Fall 2022. She has been working in inclusion, health advocacy, and the development spheres for more than 6 years. She holds a M.A. in Poverty and Development and a B.A. in Anthropology and Sociology.

Previous: In 2022, Barriers Remain for People with Disabilities in the Midterm Elections

Next: Remembering Lois Curtis, A Hero of Independent Living