A Guide to 2023 Disability-Inclusive Sundance Films

Park City, Jan. 19 – With one-in-five people having a disability in the U.S. today, the lack of representation – just 2.3 percent of characters in the 100 top-grossing films of 2019 and 8 percent in family films – means that millions of people are unable to see themselves reflected in media.

The 2023 Sundance Film Festival (January 19 – 29) will provide an opportunity for audiences with various disabilities to see themselves represented – both in-person and virtually.

This year, several films feature disability in the plot, including Is There Anybody Out There?, Sometimes I Think About Dying, Slow, The Eternal Memory, The Tuba Thieves, To Live and Die and Live, Still: A Michael J. Fox Movie, Fairyland, Chanshi, Take Me Home, Well Wishes My Love, Your Love, By Water, and Thriving: A Dissociated Reverie, among others.

The 2023 Sundance Film Festival returns to a mostly in-person festival with most films available for screening virtually as well. According to Sundance, all films will be available with closed captioning. In addition, the festival says it is their practice to “provide open captioning and audio description wherever possible.” According to their website, 22 feature-length films include audio description (AD) for blind and low-vision viewers. Viewers looking to utilize audio description or closed captioning through CaptiView devices are encouraged to fill out a Festival Accessibility Request Form prior to the screening. The accessibility team can be reached via email at [email protected] or by using the accessibility hotline at 435-776-7790. All virtual screenings offer closed captioning for viewers to turn on and off themselves. In addition, ASL interpreters will be offered at select events, panels, and Q&As following film screenings. They may be available at additional Sundance-hosted events upon request. Learn more on Sundance’s website.

The Sundance Institute is participating in the Film Event Accessibility Scorecard to both increase data collection within the Film Event Industry and to provide an opportunity for individuals to participate in an anonymous survey of their efforts. This is a tool created and managed by FWD-Doc, a group of filmmakers with disabilities and active allies.

Below please find a guide to several of the films featuring disability in the plot or talent with disabilities.

Fran likes to think about dying. It brings sensation to her quiet life. When she makes the new guy at work laugh, it leads to more: a date, a slice of pie, a conversation, a spark. The only thing standing in their way is Fran herself. Cast: Daisy Ridley, Dave Merheje, Parvesh Cheena, Marcia DeBonis, Meg Stalter, Brittany O’Grady. World Premiere. Available online. 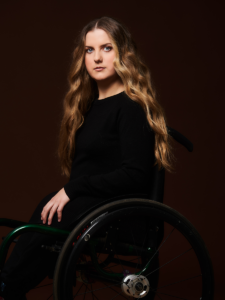 Ella Glendining, Director of “Is There Anybody Out There?” Courtesy of Sundance Institute.

While navigating daily discrimination, a filmmaker who inhabits and loves her unusual body searches the world for another person like her and explores what it takes to love oneself fiercely despite the pervasiveness of ableism. World Premiere. Available online. All film screenings of this title will be shown with Open Captions.

Dancer Elena and sign language interpreter Dovydas meet and form a beautiful bond. As they dive into a new relationship, they must navigate how to build their own kind of intimacy. Cast: Greta Grinevičiūtė, Kęstutis Cicėnas. World Premiere. Available online.

Augusto and Paulina have been together for 25 years. Eight years ago, he was diagnosed with Alzheimer’s disease. Both fear the day he no longer recognizes her. World Premiere. Available online. 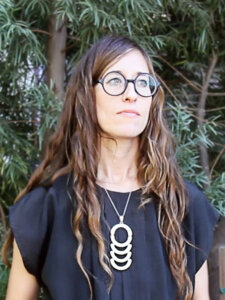 From 2011 to 2013, tubas were stolen from Los Angeles high schools. This is not a story about thieves or missing tubas. Instead, it asks what it means to listen. World Premiere. Documentary. Available online. All film screenings of this title will be shown with Open Captions.

Muhammad returns home to Detroit to bury his stepfather and is thrust into settling his accounts, but Muhammad’s struggles with depression and addiction may finish him before he finishes the task. Cast: Amin Joseph, Skye P. Marshall, Omari Hardwick, Cory Hardrict, Dana Gourrier, Maryam Basir. World Premiere. Fiction. Available online.

The improbable tale of a short kid from a Canadian army base who became the darling of 1980s Hollywood — only to find the course of his life altered by a stunning diagnosis. What happens when an incurable optimist confronts an incurable disease? World Premiere. Documentary.

Set against the backdrop of San Francisco’s vibrant cultural scene in the 1970s and ’80s, chronicling a father-daughter relationship as it evolves from an era of bohemian decadence to the heartbreaking AIDS crisis. Based on the best-selling memoir Fairyland: A Memoir of My Father by Alysia Abbott. Cast: Scoot McNairy, Emilia Jones, Geena Davis, Cody Fern, Adam Lambert, Maria Bakalova. World Premiere. Fiction. This film offers Audio Description.

Chanshi is from a Jewish-Orthodox Brooklyn family. She uses the story of a friend’s wedding in Israel as a cover to escape her conservative bubble and fiance. Free to fulfill her forbidden fantasy of sleeping with Israeli soldiers, her trip triggers a past trauma threatening to ruin her adventures. Cast: Aleeza Chanowitz, Henry Winkler, Caroline Aaron, Tomer Machloof, Marnina Schon, Lee Bader. World Premiere. Available Online. 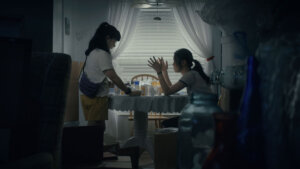 Jeena Yi and Anna Sargent in Take Me Home. Courtesy of Sundance Institute.

Newly orphaned and freshly wounded from a loss, a boy lends his companion a prosthetic arm for the day. The companion records the limb being exposed to textures and materials. What will become of the limb and the video recordings? Cast: Gabriel Gabriel Garble. Available Online.

An unlikely hero’s journey into his own memories becomes a vehicle for reconciliation and healing for himself and his sibling. Available Online.

Other films that may touch on disability include Little Richard: I Am Everything (U.S. Documentary Competition, Director and Producer: Lisa Cortés), which premieres on January 19 at 9:00 pm MT. Little Richard was born with one leg shorter than the other, had sciatica in his left leg, and eventually used a wheelchair on stage. Similarly, Nam June Paik: Moon is the Oldest (U.S. Documentary Competition, Director and Producer: Amanda Kim) premiers on January 22 at 6:05 pm MT. Paik used a wheelchair the last decade of his life after a stroke paralyzed his left side in 1996. Judy Blume Forever (Premieres, Directors and Producers: Davina Pardo, Leah Wolchok), which premieres on January 21 at 11:30 am MT, may discuss Blume’s breast cancer. Judy Blume Forever offers Audio Description.