Characters with Disabilities More Likely to Be Rescued or Die, But Those in the Workforce Portrayed Positively in Family Films 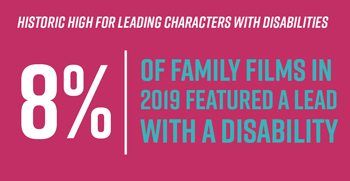 Los Angeles, California, May 4 – When it comes to showing people with disabilities on TV, they are almost never seen, and when they are, it is in a negative light, limiting opportunities for people with disabilities everywhere. However, a new study found the family film industry brings a continued historic high for leading characters with disabilities. In fact, eight percent of family films in both 2018 and 2019 featured a lead with a disability. This is jump up from just one percent from most of the last decade and shows that the increased representation is being sustained from one year to the next. While this number is still not representative of people with a disability in the U.S. – as one-in-five people in the U.S. live with a disability today, it is a step in the right direction.

“Media is one of the most immediate and impactful ways to influence our views on societal norms and has the power to eradicate intersectional gender inequality in our global cultures,” said Madeline Di Nonno, CEO of the Geena Davis Institute on Gender in Media. “If our audiences can see themselves positively portrayed onscreen, it can reinforce the message that they matter. And also, it can influence their long-term views throughout their lives.”

The study, See Jane 2020 Film, was conducted by the Geena Davis Institute on Gender in Media and USC Viterbi School of Engineering. It evaluated the 100 top-grossing live action and animated family films (rated G, PG or PG-13) of 2019. These films included a total of 2,991 characters, including 122 leading/co-leading characters, 1,032 supporting characters and 1,837 minor characters.

Family Films Portray Employees with Disabilities in the Workforce Positively

However, far too many of these characters reinforced negative stereotypes, including making the disability the most prominent aspect of the character. Often times the storyline revolves exclusively around the character’s relationship to their disability, with no other personality traits.

According to the Ford Foundation’s Changing the Face of Disability in Media, most negative portrayals of people with disabilities fall into one of four stereotypes: the Super Crip, the Villain, the Victim or the Innocent Fool.

The See Jane report fund that many of the characters analyzed in family films fall into these first two negative stereotypes, identifying that:

“These storylines often reinforce the superiority of people without disabilities (and thus, the importance of “overcoming” a disability), glorify those with disabilities for being able to live a normal or successful life, and support the notion that overcoming is a matter of personal character rather than highlighting institutional or structural barriers that can make it more difficult for those living with disability to have the same resources and opportunities,” the report reads. 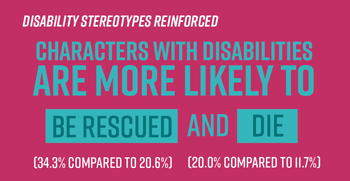 Positive Outlook for the Future

While the family films data shows a positive upswing, a study conducted by the Geena Davis Institute the previous year found that television content is lagging, as fewer than 1 percent of leading characters in children’s television have a physical, mental or communication disability.

However, this new report is part of an upward trend for increased representation of people with disabilities on screen. In November 2019, GLAAD found that the number of series regular, primetime-scripted broadcast television characters with a disability reached a 10-year record high for the 2019-2020 season, rising a full percentage point to 3.1 percent. While this is a record high, the report cautions the data “still falls far short of reflecting reality,” similar to the data found in the See Jane report.

“Including a character with a disability must be an intentional effort,” said Lauren Appelbaum, who leads RespectAbility’s Hollywood Inclusion efforts as the organization’s Vice President of Communications and author of The Hollywood Disability Inclusion Toolkit. “What we see, or don’t see, on screen influences how we act in real life – making it all the more important to promote content that accurately portrays children with disabilities. The entertainment industry has an opportunity to help remove the stigmas that currently exist about interacting with individuals with disabilities. Seeing these characters in family films, especially when they are portrayed as multi-dimensional beings and their disability is not the sole focus in the story, goes a long way in educating viewers.”

Content showing disability accurately not only is important to children with disabilities who want to see themselves reflected on screen but also for other children to learn to be accepting of people different than themselves.

Furthermore, disability-inclusive content can inspire parents of children with disabilities to take full advantage of the success that early interventions can bring their children. Recent breakthroughs in neuroscience have proven that children’s’ brains are “neuroplastic,” especially in the first six years of life. This means that with good early intervention, children’s brains can literally be rewired to become more successful. For example, Finding Dory presents a realistic portrayal of what it is like to parent a child with disabilities. The first scene of the film shows Dory’s parents teaching her how to play with the other children in the aquarium through role-play. Throughout the film, the scaffolding that they built for Dory as a child pays off, leading to her finding them again. Such modeling in future television shows and film can be transformative for children and parents alike, inspiring parents, teachers and other caregivers to help their children build skills, resiliency and success.

“With the market size of the extended disability community being 63%, opening the inclusion umbrella is not only the right thing to do,” added Tatiana Lee, RespectAbility’s Hollywood Inclusion Associate. “It also is economically smart, as the disability market is valued at more than $1 trillion, according to Nielsen.”

To learn more about this study and other related research, join the Geena Davis Institute on Gender in Media’s CEO Madeline Di Nonno in conversation with RespectAbility on Tuesday, May 5 at 1:30 p.m. ET / 10:30 a.m. PT.

Previous: As USDA and Nevada Enable People with Disabilities to Eat, Millions Still At Risk

Next: Webinar: Disability Portrayals on Screen Hit a Landmark High