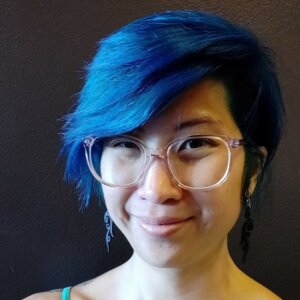 Born and raised in Boston, Massachusetts. Currently based in Vancouver, Canada. Cypher is a Writer, Director, and Independent Creator. At a young age, what mattered most were: Writing, Music, Films and Comics.

Cypher is producing her first Horror Anthology “Days of Horror” to be released this October 2022. Two Horror Short Films are in Post-Production and include several Horror Short Stories produced as Audio Dramas, Comics, Animation, and Live Action Films in various stages of Development and Production.

Cypher’s adventurous profession began in Boston 2009, in Commercial Animation. Then as a Science Film and Animation Production Editor working on scientific publications, while as a freelance colorist for indie webcomics. Then in 2018, Toronto Canada: TV Animation, where Cypher is credited as Character Animator on TV Shows such as Nickelodeon’s “Corn and Peg”, PBS’ “Hero Elementary”, and “Brogan: Master of Castles”. Moving on to Adult Comedy Sci-Fi shows as a 2D FX Animator and Artist on Hulu’s “Solar Opposites” Season 2 and Dan Harmon and Justin Roiland’s “Rick and Morty” Season 5.

TV Animation led to Cypher’s late diagnosis of Autism and ADHD in December of 2020. A defining moment of Clarity. She understood how her mind interpreted and responded to information, making it work with her and her projects. In March 2021, Cypher pivoted to her core creative interests of Writing, Music, Films, and Manhwa.

In Horror story-telling, there is inclusivity to the voices, as characters confront fears and facets of humanity. Horror is often a safe place to discuss and dress rehearse for these challenges we face as people. Cypher tells stories to amplify the uniqueness of our individualities, and to create provoking conversations of what may shape our futures. All the while having fun with it.