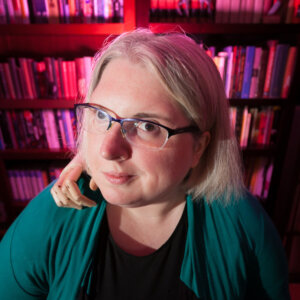 Ariel Baska is an award-winning, openly disabled horror and documentary filmmaker. As a former teacher, she is deeply interested in film’s potential to shape the future.  Her horror short about medical gaslighting, Our First Priority, which she wrote and directed, won the Disability Advocacy Award from Superfest Disability Film Festival, and was an Official Selection of Final Girls Berlin, Wench Film Festival, and the Oscar-qualifying deadCenter Film Festival, among many others. Her first animated short film, she’s never been a bird before, screened at the Engauge Experimental Film Festival. Additionally, she is a recipient of multiple scholarships from Sundance Collab and is producing several projects, both narrative and documentary.

She is the founder, co-host, and executive producer of Ride the Omnibus, a podcast parked at the intersection of pop culture and social justice. She writes about disability representation for her column in Ghouls Magazine, where she contributes film reviews and analysis. She curates creative spaces, from hosting Anime Invasion at the Alamo Drafthouse Winchester, to Accessibility & Disability Connects, a monthly meetup for filmmakers interested in accessibility and representation at the Gotham, to upcoming panels and journal articles on disability and horror. In her past life as a teaching academic, she authored four books about curriculum for twice-exceptional gifted learners.

Regardless of what story she’s telling or what work she’s doing, she cares passionately about the margins. Ariel lives in the DC area with her husband and two kittens.