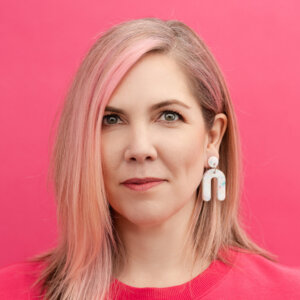 Heather Taylor is a writer/ director of TV and films about complicated family relationships — often told through a supernatural/ horror/ sci-fi lens. She is a dual Canadian and UK citizen, US Green Card holder, and splits her time between LA and Toronto. As a writer, Heather was a story editor on season two of THE HARDY BOYS on Hulu and co-wrote two episodes. Her second feature film, LETHAL LOVE, produced by Neshama Entertainment and MarVista Entertainment, is streaming on Netflix.

Her narrative podcast, ANOMALY, was an official selection of the 2021 Tribeca Festival, and she is the co-host of BRAAAINS, a podcast exploring the inner workings of our brains and how film and television portray them. She hopes the conversations on BRAAAINS help people in the entertainment industry (and beyond) look at mental health and disability representation in a new – and more informed – light.

Heather started her writing career as a playwright and poet and is the author of three poetry collections. She taught writing to refugees, prisoners, pensioners, and students of all ages, and graduated with a Masters in Scriptwriting from City University, London. Heather was a 2022 RespectAbility Lab TV Writing Fellow, and an alum of the Royal Court Young Writers’ Program and the Bell Media Prime Time TV program (in association with ABC Signature Studios). She is a proud member of the WGC Feature Film Committee.

Before becoming a full-time filmmaker, Heather used her writing and directing talents for work in journalism, PR, and advertising. As an advertising exec, she led multimillion-dollar campaigns across different industry sectors and fine-tuned her reputation as an idea machine and the Indiana Jones of research. Working in journalism, she honed her curiosity about the world and her interest in people with different perspectives. She has conducted hundreds of interviews and now applies that approach to her own projects and writers’ rooms. In aid of her work, Heather spoke to a wide range of individuals from air force captains serving in Iraq to independent music venue owners, survivors of hurricane-ravaged communities to residents of ghost towns who have nowhere else to go.

Born with a non-visible disability, Heather strives to destigmatize mental illness, disabilities, and poverty in her work. She is currently working with producers on projects that feature characters with mental health and neurodevelopmental disabilities. Heather hopes these projects will open the door for more voices and stories that need to be told. There is room for all of us. See more at: HeatherATaylor.com.