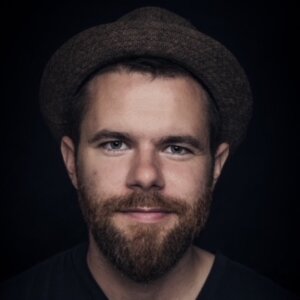 Scott Jones is a filmmaker, screenwriter, and musician from Nova Scotia, Canada. After a homophobic attack left him paralyzed from the waist down, Jones has utilized various forms of artistic expression to process his journey with acquired disability, grief, and resilience. He is most passionate about exploring narratives and creating works of art that authentically convey the complexities of living at the intersection of disability and queerness. Jones worked with director Laura Marie Wayne and the National Film Board of Canada to create a feature-length documentary, “Love, Scott (2018),” that explores trauma and resilience in relation to small town homophobia. Jones is collaborating with playwright Robert Chafe (Artistic Fraud Theatre) and director Jillian Keiley (National Arts Centre of Canada) to create a play on the complexities of forgiveness (“I Forgive You”), which is set to premiere at the Saint John’s Arts and Culture Centre (Newfoundland) in August 2022. Jones has participated in the AccessCBC Lab (2022) for scripted TV writers with disabilities, the Bluenose All Abilities Film Festival Mentorship Program (2022), and the Whistler International Film Festival Screenwriting Lab (2020). In 2020, Jones won the Atlantic International Film Festival Screenwriter’s Lab Power Pitch Award for his feature film screenplay “Opus 118, No. 2.” He recently wrote and directed his first short film, “Coin Slot (2022),” which premiered at the British Film Institute LGBTQ Flare Festival (UK, 2022) and the Phoenix Film Festival (AZ, 2022). He has also worked as a disability consultant on numerous projects, including the upcoming reimagining of “Queer As Folk” (Peacock, 2022). Jones is currently developing a short animation film (“Freedom,” 2022) with poet Tanya Davis and animator Sarita McNeil that will enter production this summer.