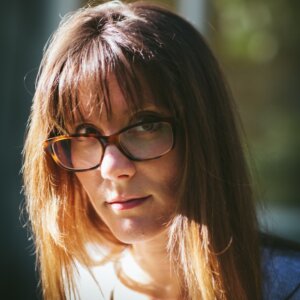 Ayla Harrison is an LA-based playwright and screenwriter from the backwoods of Florida. From the moment she was born, Harrison’s life was a series of near-death experiences. A rare retinal disease caused her to spend three months in an ICU, and as a result of several complications, this left her blind with low vision before the age of one. Growing up alongside a disability rights/LGBTQIA+ political activist father and a blue-collar Oklahoma-bred mother, Harrison’s work often centers on low-income characters struggling with issues of class, disability, identity, and gender.

While coming up as a playwright, she earned her MFA in Playwriting from UCLA, assistant directed plays at The Geffen Playhouse, worked in the lit department of Woolly Mammoth Theatre Company, and taught inner-city kids at The Shakespeare Theatre. Her plays have been produced around the country, with productions and workshops in Los Angeles, New York, Boston, DC, and Nashville. Recently, Harrison was selected to be part of the Women In Film Writers Circle, the Sundance Collab mentor collective, and she has written for TV on Hulu and Netflix.

Previous: The Need For Safe Refuges