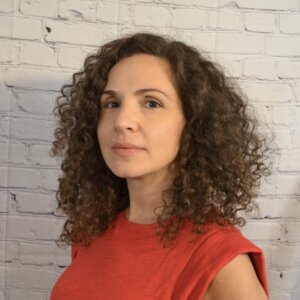 Born in Tel Aviv, Morani Kornberg had a dream to become a college professor. But after earning her PhD in English, she realized that she wanted her research on Israel and Palestine, coupled with her mental health experiences, to reach the widest possible audience. She has since transitioned from scholar-poet-translator to writer-actor.

Morani was recently selected to participate in the 2022 Women in Film Peer Mentoring Program. She also attended the UCLA School of Theatre, Film and Television in their Acting for the Camera Professional Program and UCB Improv. Previously, she taught literature, writing, and theory at UCLA, SUNY Buffalo, and Tel Aviv University. Morani has also published widely across genres, including academic articles, poems, essays, translations, and a poetry book, Dear Darwish. She participated in Oral Storytelling Shows at the Markaz/Levantine Center and showcased parts of her solo show Letting Go of Zelda. Morani was a member of TAU’s Playback Improv Theater and Buffalo’s Poets Theater and has performed her poetry in the U.S., Europe, and the Middle East.

Morani is currently working on multiple projects — spanning from television to film — all with the aim of breaking mental health stigmas, transforming the social imagination, and subverting political, gender, and national divides.