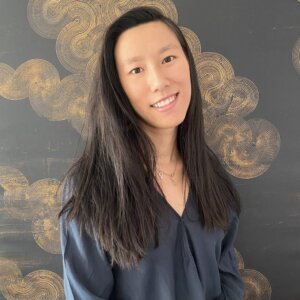 Jacqueline Gerdne is a writer and director who began her filmmaking journey when her middle school teacher handed her the school’s iPad and told her to shoot something. With a passion for horror, the result was an awful home remake of The Ring (2002) where she played Samara crawling out of the TV. That was the end of her acting career but not her filmmaking career. Since then, she has become a British Film Institute Film Academy alumni (BFIFA) and earned her B.A. in Film and TV Production at the University of California, Los Angeles (UCLA) and minored in Asian Languages and Cultures.

Growing up, disability wasn’t discussed, despite her struggling with math and writing and later being diagnosed with dyscalculia and dysgraphia. It was simply treated like something she had to work hard to overcome. Her life experiences have fueled her desire to make socially conscious films that spark real conversation and highlight proud and bold disabled, POC, LGBTQ+, and female-centered stories through character-driven, visual storytelling.

Her UCLA thesis film “Shatter,” aimed to break stereotypes about chronic illness and disability by opening a discussion about Premenstrual Dysphoric Disorder (PMDD). The underrepresented condition falls through the cracks between endocrine and mental health, two topics heavily stigmatized in society. Gerdne was diagnosed with PMDD after five years of medical gaslighting, misdiagnosis, and being told that she was exaggerating. She is actively trying to spread awareness and education so that no one else will go through the same dismissal and misunderstanding she experienced.