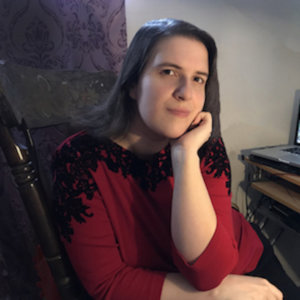 Hilary Van Hoose writes character-oriented, female-led genre stories about fish-out-of-water or outsider protagonists who discover their place in the world by making a difference in other people’s lives. The winner of the 2021 Stage 32 Sci-Fi/Fantasy Screenwriting Contest and a 2021 RespectAbility Lab Fellow, Hilary is currently a writer on an upcoming Nickelodeon YouTube series. Her screenplays have placed in such notable competitions as Sundance Episodic Lab, Austin Film Festival, BlueCat Screenplay Competition, and Scriptapalooza, and are ranked on the Coverfly Red List. She has previously worked as a calculus tutor, college librarian, video editor, and comedy club production staffer.

Moving to Los Angeles to earn her M.F.A. in Film and Television Production from the USC School of Cinematic Arts, Hilary originally chose an emphasis in comedy television because USC was the first university in the nation to offer a program dedicated to training filmmakers in the art of comedy. She not only took on a position as a member of the USC Comedy student board but also earned approval for her graduate thesis to be comprised of two half-hour pilots produced for the school’s flagship television production class (as an editor for the first, and as a director for the next year’s pilot episode). As a comedy writer, she won the first ever Jack Oakie and Dale C. Olson “You Heard it Here First” Award for Excellence in Entertainment Communication in Honor of Victoria Oakie, but Hilary’s screenwriting hit its stride when she began writing genre scripts that retain subtle comedic influences.

Hilary grew up primarily in Northern California and Hawaii, where she developed a love of outdoor activities, and where her skills as a culinary artist won her more than 160 awards in local competitions. Turning her creativity towards filmmaking, she earned her B.A. in Film and Digital Media Production from UC Santa Cruz (go banana slugs!). Entering as a Regent’s Scholar, she won the film department’s Porter College fellowship for two consecutive quarters and gained certification in Leadership Training and Development from the UCSC Experiential Leadership Program, then graduating Phi Beta Kappa and Magna Cum Laude after returning from the UCEAP French Language & Culture program in Paris, France.

Hilary has worked telling stories as everything from an office PA to a producer at such companies as Illumination Entertainment, NBC Universal, CBS Television Studios, Josephson Entertainment, Laugh Factory, Amazon Studios, and Bad Robot. Above all, Hilary is excited to create characters and stories that touch readers and audiences deeply, and become an important part of their lives. Her goal is to be a showrunner and to occasionally write for feature films.