Finding Myself at a Jewish Sports Camp 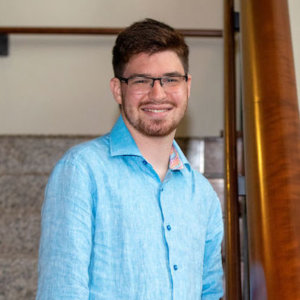 In 2010, I began my journey at Camp Bauercrest. I had been visiting camp for a long time, as my brother and father were both proud alumni. My attendance at camp was always destined to be. However, as a person with a physical disability causing low muscle tone, it was far from clear that I would find my Jewish home at a sports camp.

Prior to going to camp, I was an awkward middle school student. I did not have many friends and was not particularly happy at home. Camp, at the beginning, was not much different. I broke my wrist and was forced to cut my first summer short. I had trouble making friends and was the least athletic kid in camp, making me feel like an outsider.

For some reason, I stuck with it, and something changed in my third year at camp. It all started with Friday night festivities. Spirit is at an all-time high on Friday nights, starting with Shabbat services and leading into multi-generational camp songs and cheers. I fell in love with the spirit and tradition of camp. Nobody cheered louder at inter-camp tournaments or during Color War than I. As I became a part of the spirit of camp, I realized that I was being drawn into a community greater than myself; I was a part of decades-old camp traditions. I vividly remember starting cheers in the dining hall as a camper and counselor and having the entire camp join in.

Given my spirit and sense of tradition, my fellow campers started to see me not only for my athletic shortcomings. They started to get to know me for me. Bonding took place mostly during downtime in the bunk, not on the athletic fields and courts. Yes, Bauercrest is a sports camp, but inclusion often takes place during impromptu downtime, rather than during structured sports moments. My inclusion at camp culminated in being asked to deliver the first Shabbat service sermon of my age group, an enormous honor. Imagine, a kid like me, one with low muscle tone, could be included at a sports camp.

As I look back on my many summers at Bauercrest, I realize that camp, and spirit, more generally, are the backbone of my Jewish heritage. Judaism, for me, is symbolic of friendship, brotherhood and inclusion. Today, the friends I made at camp are my best friends in the world and there is nobody I feel more accepted by.

There are several lessons that come to mind when I think of my inclusion experience at camp. First, inclusion takes time. My friends had to take the time to get to know me on a deep personal level before including me in their tight-knit group. They ultimately realized that I was not very different than any of them; deep down we shared many of the same values. True inclusion is a purposeful action motivated by a person’s true feelings.

Second, not feeling included is hard. Camp was really a struggle before I started to feel included. I wanted to make my camp experience “work.” I knew, from stories from my dad and brother, how great camp could be if I just let it play out. They were right. Camp has made me into the man I am today and has instilled in me confidence and a true sense of self.

Jake Stimell is the first-ever Associate, Speakers Bureau & Jewish Inclusion at RespectAbility, a nonprofit organization fighting stigmas and advancing opportunities so people with disabilities can fully participate in all aspects of community. In his work, Stimell recruits, trains and places leaders with disabilities as speakers with the National Disability Speakers Bureau (NDSB). He connects talented speakers to organizations (nonprofits, corporations and educational institutions) seeking disability training. Reach Stimell at Jake.S[email protected]

Next: Ambassador of JOY Barry Shore Featured in Series on Jews With Disabilities, “What Do You Pray For?”