A Philadelphia Yankee in Queen Elizabeth’s Court: by Carol Gould 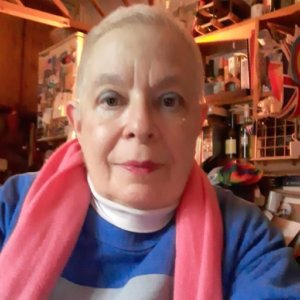 I am honoured that Jennifer Mizrahi has asked me to write from Great Britain, where I have lived as an expatriate American for forty-five years, about being Jewish and battling stage 4 breast and lymph node cancer during Covid. I am delighted to share some of my story with you. In a future installment, I will examine the ‘dynamic’ of being disabled, fighting cancer and secular Jewish generosity in the COVID-dominated world.

When I first arrived in the UK in 1976 it was a rude awakening. I had been raised in a Reform tradition, attending Rodeph Shalom in Philadelphia. Although we celebrated Pesach, lit Chanukah candles and commemorated Rosh Hashanah and Yom Kippur, we did not keep kosher. My mother DID have weekly deliveries from a kosher butcher but we were far from traditional Ashkenazi orthodox. I also consider Sunday morning lox, bagels, whitefish, chub and all the trimmings part of growing up Jewish but as of today I have yet to experience this tradition in England. Yes, of course, I am single and the Sunday brunch is a family affair but on the very rare occasions in which I have been invited to an Anglo-Jewish home on a Sunday this feast has never unfolded.

Oddly enough my mother instructed me upon my arrival in London as a graduate student to “find a Jewish family and get to know them. Eat with them. Have yomtov with them. As you are now so much closer in geographical terms, VISIT ISRAEL.”

The first thing I did was to go to Charing Cross Road and stop by one of its famous bookstores. I asked the young salesman for the section on Israel. He glared at me and bellowed, “YOU MEAN OCCUPIED PALESTINE.”  He directed me to the shelf labelled Palestine and I did find a guidebook about Israel but that was my very first experience with the British animosity towards the Jewish State – their former colony which through decades here I have been told over and over again is ‘illegal’ and was ‘founded by terrorists.’

The second thing I did when I arrived in 1976 was attend a Shabbat service in central London. It was my first time in twenty-two years sitting upstairs in a shul. The women were reasonably attentive and polite but I so wanted to sit downstairs and listen to the sermon. Sure enough, at Kiddush a sweet lady, Mrs. Stern, invited me to her home for Friday night dinner. The following Erev Shabbat, there I was sitting at her table with her large family and what did I do? I told them my grandma Rose and I were expert at picking out the best LOBSTER at the Manayunk seafood market in Philadelphia! You can imagine the deathly silence at the Stern family table. I really did not know what I had said that had caused their state of shock. The rest of the dinner was torture; when I did open my mouth there was a collective look of horror, as they obviously expected me to come out with yet another bombshell.

Flash forward to 1991, when after a series of bereavements I was encouraged by Naomi Gryn, an old friend in the television industry and daughter of Rabbi Hugo Gryn, to join a community. I joined the Liberal Jewish Synagogue. Over the intervening thirty years I did not really ‘find a home’ in any shul and indeed joined and left three different ones. What I found most disconcerting was the feeling of exclusion as a single woman. (When I was an executive with ITV Drama our Russian-born casting director, Jenia Reissar, herself what in those days was known as a ‘spinster,’ warned me “You will never be accepted in this country for three reasons: you are foreign – American – Jewish and a single woman.”)

I re-joined the Liberal Jewish Synagogue three years ago as it was beginning to hold events for single members and an annual LGBT chavurah dinner. I had had a bad fall in 2014 that to this day has rendered me disabled in my right arm and shoulder. Six months after that came a heart attack. In 2016 after six and a half years’ remission breast cancer returned, stage 4. Over four years of chemotherapy at the Royal Marsden and in a year of COVID-imposed isolation (I often joke that chemo is “blessed human contact”) I have never felt the synagogue community has gone out of its way to offer me a Friday night dinner, an outing in a car or a visit. One of the biggest problems a single person of modest means has with the modern community is their affluence. We have done well as a people but sometimes forget those left behind. It is on this that I will focus in my next piece.

Carol Gould is a native of Philadelphia and a Phi Beta Kappa 1976 graduate of Temple University. She has lived in Britain for forty-five years as a network television drama executive and BBC, Sky News and LBC political commentator. She commissioned many ITV UK plays and series for ‘Masterpiece Theater’ and ‘Mystery’ including ‘Cause Celebre’ by Terence Rattigan, starring Helen Mirren and David Suchet and six PD James thrillers. She is the author of ‘Spitfire Girls,’ about the women pilots of World War 2, and ‘Don’t tread on me – anti-Americanism Abroad’ about anti-Semitism and US-hatred. She has written for the Telegraph, Guardian, Jewish Chronicle and Forward. In 2020 she was inducted into the Court of Distinguished Daughters of Philadelphia High School for Girls; fellow recipients have included Gloria Allred; Helene Hanff and Bishop Barbara Harris.

Next: Shelly Christensen Speaks at Reform Temple of Rockland