Glass Half Full: Acquiring A Disability: by Rachael Risby Raz 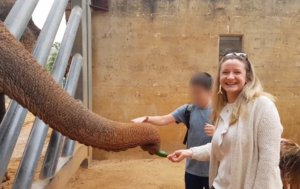 On Rosh Hashanah, my phone was buzzing with dancing shofar GIFs, pomegranate pictures, and jokes about how we Jews had finished this challenging year. Among these was a strange message from my friend Avi, saying “Just remember, it could always be worse!” Little did I know that this quirky ‘blessing’ would become a mantra for me in the weeks that followed.

The story really starts two years ago, at my son’s graduation concert from primary school. During this emotional and tiring day, I suddenly started seeing double. After a week-long stay in the wonderful new Hemsley Neurological Institute at the Jerusalem’s Sha’are Zedek Hospital (a quasi-vacation at the end of the school year, but with a myriad of tests instead of spa treatments), I was given the likely diagnosis of Multiple Sclerosis.

I let myself cry for half a day and then went to work researching this new challenge in my life and making a plan.

I decided to take up a recovery plan formulated by a wonderful organization called Overcoming MS that originated in Australia, where I grew up. This involved major lifestyle changes: diet, vitamin supplements, meditation and more.

I was 43, and working in politics with a stressful 2-4 hour commute each day from Jerusalem to Tel Aviv. After my diagnosis, I changed jobs to the most therapeutic workplace one could wish for – the Tisch Family Biblical Zoo in Jerusalem, a three minute drive from my home! After making these changes, all my MRI scans were stable, I was not put on any medication, and had no symptoms for two years.

However, a few weeks ago, everything changed when my annual check-up MRI scan turned up a large, new, active lesion. Funnily enough, the first thing that came into my mind upon hearing the news, was my friend Avi’s Rosh Hashanah greeting – “it could always be worse!”

I have always been a “glass half-full” person, which serves me well in my current situation. As I undergo a week of treatment, here is my “half-full glass”:

1. My annual MRI to track the progress of my MS was meant to be in August. The earliest appointment I could get was the end of September, six weeks later. The delay made my lesion visible in the scan in time to be treated. If my scan had been earlier, and the lesion had not yet been visible, we might not have seen it until the next annual scan, which could have led to a worse outcome.

2. Despite the lesion, I am still without symptoms and feeling just fine. This is apparently quite unusual: my doctor was rather incredulous at first but I passed all the neuro tests with flying colors! Yeah vegan diet, meditation and yoga!

3. The world-class MS Clinic at Hadassah Ein Kerem Hospital is a seven minute drive from my home and is leading innovative new treatments in the field, including stem cells.

4. Israel has a socialized medical system, which means I do not pay extra for any treatments, apart from the three to five percent of our salaries we pay as health tax in Israel.

None of my MRIs, outpatient’s visits, doctors’ consultations, medications and tests, cost me anything. It is truly one of the great blessings of living in Israel. This has an interesting personal twist, as my political boss, former Prime Minister Ehud Olmert, was one of the main figures in pushing through the universal health insurance legislation when he served as Health Minister. This means I can treat myself to the expensive undercover parking at the hospital!

5. MS has really great medicines these days. As a child in Australia, I used to participate in a fundraising event called the ‘MS Read-a-Thon’, where people sponsored us to read books to raise money for MS research. It’s mind blowing to even think of the fact that some of the medicines available today came about as a result of money raised by kids like me reading books!

6. I am currently on leave from the zoo, as it is unfortunately closed due to the current lockdown in Jerusalem. Still, I receive paid unemployment benefits from the government and I am not even using up any of my sick days!

Wishing you all good health and a Shabbat Shalom from beautiful Jerusalem.

Rachael Risby Raz is the International Relations Manager of the Tisch Family Biblical Zoo in Jerusalem. In the past she served as the Advisor for Diaspora Affairs for the Prime Minister of Israel. Her first job in Israel after making aliyah was at the Hadassah Office in Israel. She is married and the mother of three amazing and very Israeli kids.

Previous: The Community Reinvestment Act and Why It Matters for People with Disabilities

Next: Steinberg Uses Personal and Unique Understanding of Disability Community to Help Others Achieve Success