Los Angeles, California, Sept. 17 – A new film recently premiered on Netflix that is very intentional about meaningful representation and authentic casting. All Together Now features Anthony Jacques, who is on the Autism spectrum and Gerald Isaac Waters, who uses a wheelchair. Both Jacques and Waters’ characters are multi-dimensional and not defined by their disabilities.

“As an actor with a disability, we get a lot of roles where the role itself is involved with the disability,” said Waters, who plays Chad, and uses a wheelchair on screen and in real life for mobility. “To have one come by where he just so happened to be in the chair, I thought that was really great. It’s really important to see we can do any role and it doesn’t have to be completely circled around our disability.”

Waters’ character Chad is part of the lead character Amber Appleton (Auli’i Cravalho)’s group of friends. Cravalho herself has publicly talked about seeing mental health professionals. The film also portrays the topics of mental health, alcoholism and experiencing homelessness, as Amber and her mother find themselves living in a school bus. Nearly 4.2 million youths and young adults experience homelessness each year but it is not often portrayed in family and teen content.

Far too often, films only use disability as the punchline or the focus, and do not give the disabled character personality beyond their disability. All Together Now was refreshing to see, as that was not the case.

“This is a film that champions the importance of hope and we had the opportunity to represent a variety of communities, abilities and people,” said Mandy Beckner, Director of Films at Netflix. “We wanted to ensure authenticity on screen, but also make sure the film environment was one that made all actors feel supported and allowed them to do their best work. Inclusion on and off-screen is an important value at Netflix, and we couldn’t be more thankful for the support we have had on every side to honor this value.”

“He would come up to me in between takes, say, ‘I want you to do what you would do naturally,’” said Waters. “I felt like I had a voice and it was very listened to.”

As a wheelchair user, Waters was able to bring authenticity – specifically in regard to everyday motions and situations – to the role.

“I move a lot, have to reposition myself for pressure releases,” Waters said, explaining that in order to be comfortable, he does “things that came naturally to me.” During shooting, he explained, “there is a part where I do lift up and I’m talking like this and then I sit down.”

Because Waters does what is natural to him, this is viewable in the film, ensuring an authentic role.

The same applied for Jacques, who plays Amber’s best friend and is on the autism spectrum in both the film and in real life. 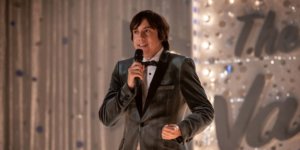 Cravalho noted the importance of these casting choices, stating their friendship and chemistry worked well. “In no ways are those disabilities holding them back as actors, at all,” she told Teen Vogue. “And they’re certainly not holding them back in the genuine relationships that I know I have with them, as well.”

Often, there is a misconception that including actors with physical disabilities will cost the production more. Yet, most accommodations cost $500 or less. The production team for All Together Now worked with Jacques and Waters to ensure accessibility and it led to a more positive environment on set for everyone. 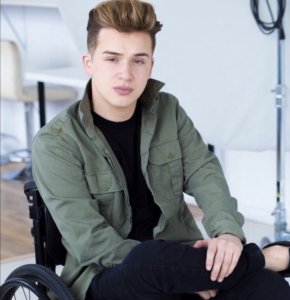 Waters’ trailer, for example, has enough room for him to turn around in his wheelchair and get dressed. In addition, the entire back folds down into a ramp; the team for hair and makeup came to him in the trailer and the ramp allowed for easier access for rolling racks versus stairs. Waters was nervous about feeling isolated, not being able to go into all of the other trailers. Instead, his trailer became “the party, hang-out trailer.”

“The [production team] did not want me to feel excluded,” Waters said. “They went above and beyond.”

For Jacques, a typical accommodation included “included extra time to sensor myself” if he was feeling overwhelmed at any time and additional food options.

“If the food on set was not to my liking, they would go out of their way and bring me food that was to my liking, which I appreciated very much,” he said.

Waters sends message to creatives about including actors with disabilities: “Don’t be afraid to take on that little challenge”

“People on the spectrum or with physical disabilities are capable of doing anything when given the opportunity,” Jacques said. “We can be actors, writers, directors. We could do anything.”

And, for people with disabilities wanting to work in this industry, Waters advised to not dismiss yourself because it may seem out of reach.

“Don’t put limits on yourself. Don’t count yourself out because it might be a little more of a challenge. Take it on as something to prove to yourself as something you can do.”

“I would advise anyone on the spectrum or with physical disabilities to stay positive,” Jacques added. “You may not always get the part that you auditioned for, but if you keep a positive attitude and keep trying, good things will happen. I’m living proof.”

Next: Vincenzo Piscopo Lifts Up People with Disabilities at Coca-Cola and Around the World