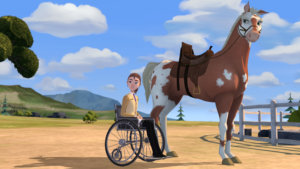 Los Angeles, California, Sept. 3 – With one-in-five people having a disability in the U.S. today, the lack of representation – just 3.1 percent on screen and even less in children’s television (less than one percent) – means that millions of people are unable to see themselves in media today. DreamWorks Animation and voice actress Cassidy Huff, who has Conradi-Hunermann syndrome, is helping to change this statistic.

“The reality is, the disability community is facing extreme underrepresentation in this industry and it’s time to change that,” Huff said in an interview with RespectAbility. “In order for disability to be normalized in society, we have to start by introducing it to the youngest ones in this generation and letting them ask questions!”

Spirit Riding Free: Riding Academy’s Season 2 premiere introduces a new character who uses a wheelchair and voiced by Huff, a part-time wheelchair user. While Huff has a variety of disabilities, she does not want to be defined by them.

“I’d like to just be an actress without a label,” she said. “I want to be able to work in an industry where disability isn’t the only thing people see about me or the characters I portray.” 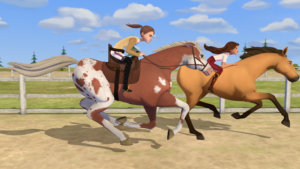 This animated series features Lucky and her horse Spirit while she embarks on adventures with her friends while living and learning at the prestigious Palomino Bluffs Riding Academy. In the Season 2 premiere, Lucky gets a run for her money when she meets a new addition to the academy: Eleanor, a horseback rider who uses a wheelchair. I had the pleasure of talking with Huff, the actress behind the voice of Eleanor, about playing this role.

Read more from our interview with Huff below the trailer. 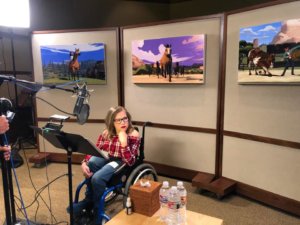 1) So many roles for disabled characters are played by someone without a disability. How was it, as an artist, to play a role that is close to your real-life experience?

Cassidy Huff: I grew up not seeing people like me on TV and in movies, and I was always so confused as to where all of us were. I’ve always said that I wanted to be what I didn’t have growing up, and I want to be that representation that kids with disabilities can look up to and say “Well, if she can do it, I can too!”

2) Would you rather do a voice of a character with a disability or non-disabled? Why?

3) What did you add to this role being a real wheelchair user that a non-disabled voice actor would not have been able to provide?

Cassidy Huff: Being a part-time wheelchair user, I think I was able to relate to Eleanor a lot more than a non-disabled actress would be able to. I was able to bring a new perspective to the table because I view the world a little bit differently. And I was able to really tap into Eleanor’s mindset of succeeding in a field where no one looks like her. And I don’t think an able-bodied actor could do that.

Cassidy Huff: We need to be creating stories in film and television that reflect the world we live in. The reality is, the disability community is facing extreme underrepresentation in this industry and it’s time to change that. It’s time to normalize disability in our society, and a fantastic start is by casting actors with disabilities in films and television.

5) This character was so fun and interesting and very competitive. Are you yourself competitive, and how fun was it voicing such a cool character?

Cassidy Huff: I’m very competitive! It was really fun to be able to voice a character that I see so much of myself in! I can relate to Eleanor in a lot of ways, and the competitiveness, sass, and determination are where we are very much the same!

6) Do you have an interest in riding horses, and, if not, what did you do to prepare for this role?

Cassidy Huff: When I was younger, I loved horses! I ride horses every summer at camp and have loved it for years! I wouldn’t consider myself a pro at all though!

7) What advice do you have for other people with disabilities wanting to work in this industry?

Cassidy Huff: If you have a disability and want to start working in this industry, I’m going to tell you now that you’re going to have to work twice as hard as all of the able-bodied performers around you. You will hear 1,000 “no’s” before you finally hear a “yes,” and there will be dozens of people in this industry who are going to tell you that you can’t make it. But I’m living proof that you CAN do this, and people like us ARE being cast in productions! You got this!

8) What do you see as the future of disability-inclusive children’s programming?

Cassidy Huff: Like I said previously, I want to work in an industry where I’m seen as an equal. I want children’s programming to have characters with disabilities, and I want it to be normalized in this industry. In order for disability to be normalized in society, we have to start by introducing it to the youngest ones in this generation and letting them ask questions! This is a fantastic start for this industry, but we have a long way to go!!

9) Is there anything else you’d like to say to our audience?

Cassidy Huff: Whether you’re disabled or not, I want you to know that you can both chase your dreams and catch them! Don’t let anyone tell you, you can’t do something, and if they do, use that word “can’t” as fuel to prove them wrong! You got this, I believe in you. Go change the world!

Previous: “Love on the Spectrum:” What the Show Got Right & Where it Can Improve

Next: Real Board Diversity Includes Jewish Leaders with Disabilities