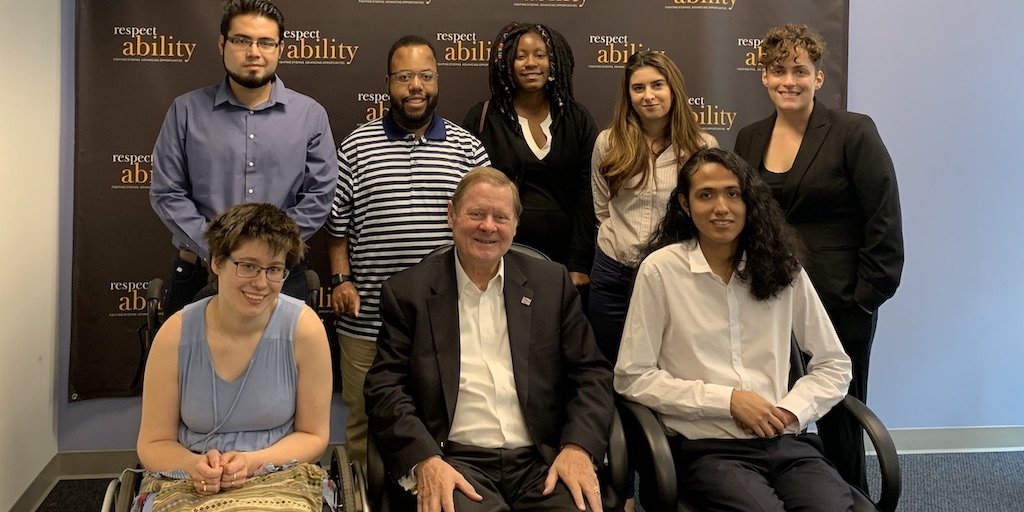 Rockville, Maryland, Oct. 25 – When Rep. Steve Bartlett, Board Chair of RespectAbility, spoke to the organization’s National Leadership Fellows, he described the talk as BYOA (bring your own agenda). Every person in the room had the chance to have Rep. Bartlett talk about a subject important to them. In the span of an hour, the former U.S. Representative from Texas covered a wide range of topics such as the lack of bipartisanship in Washington, where to get accurate news information from, how to become more involved in politics, and why he became the co-author of the Americans with Disabilities Act.

The first topic covered was the lack of bipartisanship in Washington, referring to the extreme polarization happening within the Democratic and Republican Parties. “Things are as bad as they have been since 1856,” said Rep. Bartlett, as he compared politics today to what started the civil war. He said he does not see things getting better for politics in America and thinks there is worse to come before it can get better. He explained how both the Democratic and the Republican parties have gone to their own extremes and are held captive by the 30 percent of people who vote in the primaries. Rep. Bartlett sees a solution for this crisis: a third, independent party. Bartlett has encouraged politicians to run as independent candidates but so far, no volunteers. The American people also need to ask for leadership from our leaders and representatives and demand respect from each side towards the other. 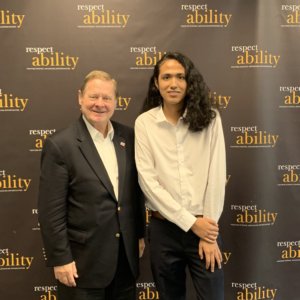 When getting his information on politics, some of Rep. Bartlett’s favorite sources are the Wall Street Journal, Dallas Morning News, Washington Post, Bloomberg Business Week, and The Atlantic. He advises people to keep it mainstream and to keep it diverse with articles written by both conservative and liberal sources. An interesting service he subscribes to is Real Clear Politics, which sends its subscribers 16 articles covering current events, half from far-left sources and half from far-right sources. He warned the RespectAbility Fellows about the danger of social media reinforcing preconceived ideas that may not be true and to not confuse opinions with facts.

For the remainder of the talk to the Fellows, Rep. Bartlett talked about becoming more involved in politics. “The hardest thing to do is making the first call,” he said when encouraging young people to get involved in politics, emphasizing that laws only come to life because citizens ask for it. Rep. Bartlett believes there are practices to successfully getting involved in advocacy. First is to identify what you want to say and who is your audience. Then one must craft connections with the audience, and this can be as simple as asking a question at a town hall; to ask a question is also to make a statement. Crafting a connection also involves calling, emailing, scheduling 15-minute meetings with representatives, and organizing with others who want to become involved with the issue. Once you figure out your message, Rep. Bartlett advises to deliver it in bite size pieces and not to overwhelm the audience. Lastly, he emphasized the importance of campaign events because the candidate running wants your vote and wants to hear you.

Rep. Bartlett then spoke about his passion, the Americans with Disabilities Act (ADA). He felt a need to take action for people with disabilities as he saw that the government was harming disabled citizens because of the $2,000 maximum savings cap for Supplemental Security Income. If a person saves more than $2,000, he or she can lose Supplemental Security Income, the sole income if one is unable to work because of a severe disability. He recalled a story of a blind person who was one of the best salespersons in his firm but lost his job because he lost his sight. Job loss is a barrier for people with disabilities, so he became an author of the ADA and has now helped increase the nationwide employment rate for people with disabilities from 22 percent to 38 percent.

RespectAbility is a nonprofit organization fighting stigmas and advancing opportunities so that people with disabilities can fully participate in all aspects of community. This fall, eight Fellows have the opportunity to learn from a variety of guest speakers. Learn more about the National Leadership Program and apply for the next cohort! Contact [email protected] for more information.

Previous: “People with disabilities are equal to the task” Says Gov. McMaster