Gov. Hutchinson Encourages “Fellow Citizens to Realize the Contributions Individual with Disabilities Add to Our Workplaces” 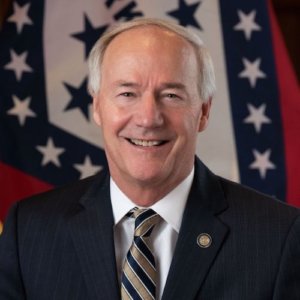 “We are excited to see so many new avenues opening up in Arkansas and across the nation for individuals with disabilities to work with so many supportive employers,” said Alan McClain, commissioner for Arkansas Rehabilitation Services. “Every day, we see the talent that individuals with disabilities add to our workforce, but this is the time of year when we want to spotlight their value to our state and our economy.”

According to the Institute on Disability, in 2018, 87,920 Arkansans with disabilities had jobs, putting the state’s disability employment rate at 30.8 percent. That total includes people who are blind or deaf or have other visible conditions such as spinal cord injuries, as well as people with invisible disabilities including learning disabilities, mental health or Autism.

As such, Gov. Asa Hutchinson has declared October as Disability Employment Awareness Month to help fight stigmas and advance opportunities for Arkansans with disabilities. “People with disabilities offer a wide range of expertise and play an integral role in our efforts to build an inclusive community and strong economy,” he wrote in his proclamation. “I encourage my fellow citizens to realize the contributions individuals with disabilities add to our workplaces and communities.” 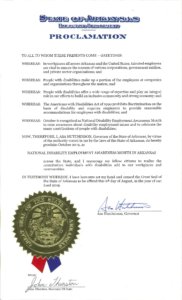 This proclamation follows a solid year of job growth among people with disabilities living in the Natural State. 2,473 Arkansans with disabilities entered the workforce last year. While this is a small number, it is a step forward and part of a continued trend of new jobs for the one in five Americans living with a disclosed disability.

South Dakota, North Dakota and Utah have disability employment rates nearly twice that of Arkansas. These differences are the results of deliberate strategies implemented by leaders in the community, in government and in the school system. Employment First is one such strategy. It is a strategy where critical social programs are oriented towards ensuring that getting a job is the top priority for individuals with disabilities. That goal is reinforced with high expectations among the teachers, coaches and parents.

Arkansas can further capitalize on past successes by following the example of states that show constant improvement such as Florida and Ohio. Both can attribute a portion of their growth in disability employment to Project SEARCH, a program for young adults with disabilities to improve their skills, learn from job coaches and ultimately find a job. Data shows that 70 percent of SEARCH interns who complete their training obtain competitive employment. By expanding such critical programs, Arkansas can greatly increase the number of people with disabilities entering the workforce.

Next: Debby Fisher: Diaries the Ultimate Tool for Emotional Management