“Getting a job out here is all about who you know,” Tatiana Lee, Hollywood Inclusionist at RespectAbility, as well as a model and actress with spina bifida who uses a wheelchair, said. “How can I do that if I literally cannot get in the room for networking events?”

Diana Elizabeth Jordan, an actress and director with cerebral palsy, said actors with disabilities need to have access to “rights that gives us equity, not an advantage.”

However, she noted that many actors often do not ask for their rights for fear of being labelled as difficult.

Most of the panelists noted that they do not see themselves represented on screen.

“I would love to see people that look like me on TV but you don’t see it,” Stephanie Thomas, a disability fashion styling trailblazer who is a congenital amputee, noted. “I’m not a wheelchair user; I’m not disabled enough.”

Jordan and Lee discussed the issue that an overwhelming majority of characters with disabilities are played by actors without disabilities.

“If there was going to be blackface, the NAACP would be all over that,” Jordan noted to nodding in the audience. “Disability is not a trained skill. It is a life experience.”

Lee added, “It would be totally fine for anyone to play someone in a wheelchair if I was able to audition for and play any role.”

She recounted a story when she was picked for a commercial but later was let go when the production team realized she uses a wheelchair. “Production doesn’t want to use you,” she was told. “They want the shots to be uniform.”

“We don’t have to say the person is disabled,” Andrea Jennings, Founder of Shifting Creative Paradigms who has a TBI and spinal cord injury, added. Jennings often encourages writers to write a character with a disability but not specifically draw attention to the person’s disability – just show it.

Talking about misconceptions and stereotypes, Gross, who is blind and uses a cane to get around, said, “People ask me who dressed me and I’m like me!”

“Just because we are not doing one thing, it does not mean we are sitting around not doing anything else,” she added.

“People see us do things that don’t look ‘normal’ and assume we are in distress and immediately come over to help whether we need it or not,” Lee, who has spina bifida and uses a wheelchair, noted. “By you not asking us, you take away our independence to ask for help. We just need you to move away half the time.”

Thomas talked about living in two words. “When people look at me, immediately, they get that impression on their face – what is she doing up there?” But when they notice her missing digits, she said, “I still get the looks and people do treat you differently.”

All of the panelists talked about being resilient and how their disability gives them the creativity to approach problems in new ways.

Yang called the issues that people struggle with on set “is our norm.” For example, shipping a wheelchair is harder than items most production companies need to ship on a daily basis.

“I hear no and I just keep going,” Jordan said. 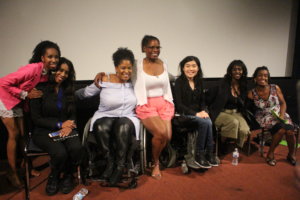 Since Jennings acquired her disability, she is able to relate to individuals both with and without disabilities, especially when teaching people how to talk about, and actively include, people with disabilities.

“We have unconscious bias we don’t realize to be around people who look like us,” she said.

Thomas noted that everyone in the room is continually on a learning journey – and more so, for the general public. “We’re never taught disability – unless you are in a special education class or have a family member with a disability,” Thomas, who teaches communication advocacy and fashion marketing, said. “We’re learning together.”

Working Toward the Future

Ultimately, to achieve inclusion, the panelists argued for a shift in mindset.

“Diversity is getting an invite to the party,” Jennings said. “Inclusion is being offered a seat.”

“It’s not enough to just put us on the list,” Yang added. “Are you actively advocating for diversity and inclusion participants?”

Cheryl Bedford, founder of Women of Color Unites & The JTC List, made a pledge at the end of the panel to do her part in ensuring inclusion of people with disabilities: “I’m only going to sit on a panel unless there is a disabled person also on the panel,” she promised. “We leave no marginalized group behind.”

Next: Center for Special Needs at the Marlene Meyerson JCC Manhattan: by Allison Kleinman