Breaking the Glass Ceiling with Ollie Cantos and Triplets Steven, Nick and Leo

Washington, D.C., Sept. 5 – At RespectAbility’s “From Washington to Hollywood and Beyond” summit, experts in the area of employment, education and disability inclusion addressed a wide array of members of the disability community. The summit showcased some of the community’s brightest stars including Ollie Cantos and his three adopted children who spoke during their own panel titled “Breaking the Glass Ceiling.”

Ollie and his children have pushed themselves and each other to break past barriers and challenges. For Ollie, he is the highest-ranking blind person in the federal government, working as a lawyer and presidential appointee. When he started mentoring blind triplets Steven, Leo and Nick in 2010, he never pictured he would adopt them five years later. Now, in 2018, their family continues to make strides in inclusion and achievement. Recently, the three young men became Eagle Scouts, an incredible achievement regardless of disability.To those not familiar with the term, this is the highest achievement to earn as a boy scout. It is an honor only four percent of all past and present Scouts can say they have received. Within this panel, each member of the family was able to tell his story of their past and their future. 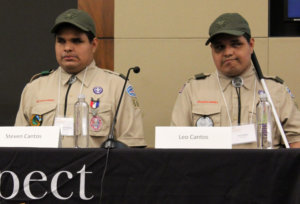 Ollie opened the panel by asking the triplets what life was like before they met him. For Stephen, he described themselves as “shut-ins” during this period of their lives. They went to school and church, but this was the extent of their weekly outings. Their mother and grandmother attempted to shelter them as much as possible, due to their blindness.

For Leo, he had the most positive outlook on life out of the brothers. However, he was dejected by his blindness and felt that he would not amount to anything in life. As much as he tried, he could not make any friends, a common theme felt by each of the triplets.

“When I was a young kid, I was a violent person,” said Nick, “I used to get into a lot of fights when I was little, because I didn’t know how to let out my anger.” The three boys clearly were struggling with bullies and schoolwork. They wanted desperately to live a “normal” life. 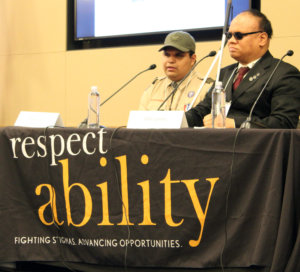 The change came when they found a mentor and father in Ollie who brought about a change in philosophy. A major realization they each had was that blindness was merely a characteristic.

“We learned that blindness is just a characteristic, and dad told us from an early age, from 10, that just because you are blind does not mean you can’t do stuff,” Leo said.

With this idea in mind, just because they were blind did not mean that the boys could not do anything. They realized that disability does not define the whole of who someone is. How did Ollie teach them this? He treated them like any other parent would treat their child. All three triplets noted how his high expectations for them were an incredibly positive influence. “He expected us to clean our stuff, do our laundry, get good grades, stay involved in community service and have fun,” Nick said. “It really helped that he had the confidence and faith in us that we could actually do it.”

By getting them into the routine of typical daily activities, the boys realized they could have any life to which they wanted to aspire.

However, Ollie did not just stop at the bare minimum. He wanted his boys to excel. All three of the young men participated in extracurriculars, ranging from music to sports to paid internships, all before graduating high school. They got their foot in the door when all the doors had been previously closed. Ollie did not let his disability stop him from actively participating in life. He did not want his sons to do the same.

Ollie, Leo, Nick and Stephen are poignant examples of breaking glass ceilings. Ollie Cantos is known throughout Washington, D.C., for his work as a government attorney. Each of his children are carving their own paths. Leo and Steven are looking to pursue a career in law, starting at George Mason University this fall. Steven hopes to pursue a career as an intellectual property attorney, and Leo wants to prepare for the tech industry. Leo’s goal is to work at Microsoft. Nick will attend Southern Virginia University this fall to study business and leadership. He hopes to pursue entrepreneurship. Each young man has curated his own interests and passions with the help of Ollie. Each has surpassed the expectations of his family, society and himself.

Disabilities do not inhibit the ability to accomplish one’s goals. Rather, they can be used as advantages to become an innovative leader. By surpassing the expectations laid out by others, one can create a new path for those behind them.

Next: Johnny Collett Calls For High Expectations for Students with Disabilities