Johnny Collett Calls For High Expectations for Students with Disabilities

Washington, D.C., Sept. 5 – When it comes to disability advocacy, reducing stigma and changing public opinion are very important. Just as significant and crucial is an aspect of daily minutiae that is less often acknowledged. Few know this better than Johnny Collett, the Assistant Secretary for Special Education and Rehabilitation Services at the United States Department of Education. Collett called for both having high expectations for students and for not putting up with adults who do not cooperate to help the students, stressing the need for not only keeping expectations high but also collaboration among all providers and advocates.

When he spoke at the RespectAbility’s “From Washington to Hollywood and Beyond” summit, Collett was clear that creating positive and lasting change for people with disabilities is crucial to the disability movement. “The only way to improve outcomes for all individuals is to be mindful of the particular needs of each individual,” he said, reflecting on his many years as an educator. 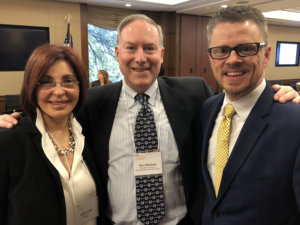 Collett was exceptionally clear in his speech that he believes that  high expectations should be the standard for all students. “I’m not going to have a debate or a long conversation with someone about whether or not we should have high expectations for each and every individual.”

In Collett’s eyes, achievement should be the standard for every student, regardless of ability. But he stressed, “I also believe that [expectations] are individually realized.”

In addition, Collett emphasized the importance of changing the systems that do not benefit all. “We have to address policies and practices that put the need of a system over the needs of an individual,” he said “We have to address laws and regulations that don’t provide enough flexibility.”

The concept of collaboration threaded throughout Collett’s speech. He ended his speech reminding the audiece of the importance of inclusion in advocacy. “While we all have a stake in the success of individuals with disabilities, I think you’ll agree with me that no one has more of a stake in their success than they do.”

Next: Kenneth Marcus Addresses Importance of Inclusion of Students with Disabilities