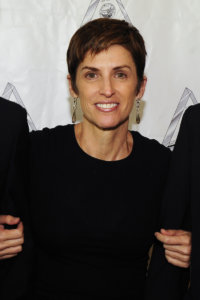 Rockville, Md., Feb. 16 – Deborah Calla is a Brazilian-born producer, writer and director. Calla is best known in the disability community for reviving the Media Access Awards (MAA). Her involvement in the disabilities movement and social justice stem from two sources: her professional experiences in Hollywood and her Judaism.

Calla came to film and TV by chance. A friend of a friend thought that because she directed and produced plays, she would be a good film producer, so he asked her to produce his first film.

“It was a very trying experience as I didn’t really know what I was doing and producing film can be an overwhelming effort especially if you have no experience,” Calla said. “In the end, I survived and loved it.”

Calla became involved with the disability community in 2010. She was the chair, and still is, of the Diversity Committee of the Producers Guild of America. As the diversity chair, she always worked with the other guilds, such as the Writers Guild of America SAG-AFTRA, Casting Society of America and the Directors Guild of America, on projects that advanced the inclusion of diverse groups. The MAA, started by Norman Lear and Fern Field, had been sponsored by the California Governor’s Committee on Disability Employment, but by 2007 the funding to the MAA was cut.

The Diversity Committee decided to start it up again and do something specifically for disabilities; Calla volunteered to produce the MAA thinking it would only be a once off.

“Once the event happened, I realized the importance of it for the disability community at large and I was hooked,” Calla said. “It’s been nine years now and I’m passionate about greater inclusion of people with disabilities and am always coming up with new ways to help make it happen. Media has a great impact in how we see others and how we relate to each other.”

Calla always has felt a great sense of social responsibility that she says she “can only attribute to my Jewish values.”

“Growing up in Brazil, I was exposed as a young child to the huge cultural, social and economic gap between the rich and the poor. It was through my Jewish education that I was able to realize the dimension of the inequality and take action. I’m proud of my upbringing as it has made me a person who can realize injustice and work towards betterment.”

Because of Calla’s knowledge, achievements and advocacy work, RespectAbility is highlighting her as a part of the #RespectTheAbility campaign, which recognizes individuals like Calla who are working toward leveling the field for all, regardless of their disabilities. Fully one-in-five Americans has a disability, and polls show that most of them want to work. Yet 70 percent of working-age Americans with disabilities are outside of the workforce.

“People with disabilities want to be portrayed as people just like everybody else is,” Calla said. “That means complex human beings that are not defined by their disability or society’s perception of their existence. It is as simple as that. The community asks: see us and treat us like everyone else.”

As a person with cerebral palsy, Sarah Bram has been a pathfinder her entire life, paving the road for those after her. She is passionate about working for nonprofit organizations, specifically in social media management.