Robia Rashid—Writer and Producer, Creator of Atypical, Calls for More Stories of Inclusion and Diversity 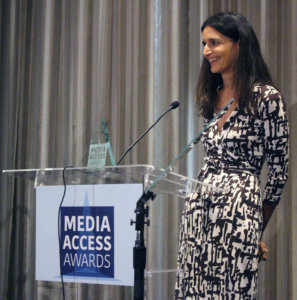 Beverly Hills, Nov. 18 – Robia Rashid has spent her career working on shows such as Will & Grace, How I Met Your Mother and The Goldbergs. However, Rashid spends her free time reading books full of “edgy and odd” stories that would not typically be shown on network television. Recently, Rashid wrote a pilot script, of which Netflix ordered the full season, and the show premiered this August.

Atypical is a coming-of-age comedy about a teenager with autism, Sam, who is navigating his love life as well as his relationships with his family and friends, while he strives for independence. Rashid said she wanted to write a show for herself after working in network television for so long. She told Vulture that she had been aware, when writing Atypical, that more people were being diagnosed with autism, and a whole generation would be growing up on the autism spectrum and would desire independence. Rashid thought it would be an interesting perspective from which to tell a dating story.

“I just feel so lucky and honored to tell this story that feels so personal and real and like nothing that I’ve ever written before or really seen before,” Rashid said while accepting her award. “It’s exciting to see Sam’s story resonate.”

During the casting process for the lead role of Sam, Rashid did not end up hiring an actor with autism as Sam. However, she came across Anthony Jacques, an actor with autism who was so compelling that she wrote a supporting role for him. Rashid, after having personal experiences with people with autism in her life, wanted to do the show justice, as well as the character’s experience. She was conscious and careful about the message that she sent to her viewers regarding the experience of a teenager with autism. By hiring an actor who has autism, Rashid also sent a clear message that people of all abilities have a place in the acting industry.

Due to her effort to hire an actor with a disability, and her well-crafted, inclusive writing, Rashid was granted the 2017 Writers Guild of America, West, Evan Somers Memorial Award at the Media Access Awards, which honors individuals who are showcasing the disability narrative.

“It’s an amazing time for stories of inclusion and diversity,” she said. “I think we need stories like this more than ever and I feel so honored to be receiving this award for telling a story.”

Read the profile on Amy Okuda awarding Robia Rashid with the award on our website: https://www.respectability.org/2017/11/18/amy-okuda-presents-award-atypical-creator-portraying-disability-narrative/.

Next: Actress and Paralympic Katy Sullivan Presents Award to Mickey Rowe at the Media Access Awards