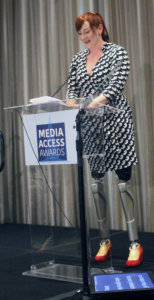 Sullivan is known for being a writer, producer, athlete and a bilateral above knee amputee. She was born and raised in Alabama and received her BFA in Acting from Webster University’s Conservatory in St. Louis.

As an actress she is known for her performances around the nation including The Long Red Road at The Goodman Theatre directed by Philip Seymour Hoffman. She also has made appearances on television shows, independent films and documentaries such as the award-winning documentary WALK ON.

Other shows she has stared in include NBC’s My Name is Earl, ABC’s Last Man Standing with Tim Allen, FX’s Legit and CBS’s NCIS: New Orleans. She recently performed alongside Wendell Pierce in the World Premier of Cost of Living at the Williamstown Theatre Festival. 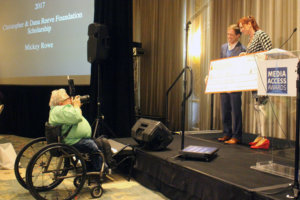 She also is acknowledged for being a producer and co-created SulliFlinn Production with fellow Webster graduate Becca Flinn. They produce short films, online comedy content and currently are making a about Katy’s experiences.

Besides being known for her performances, she is recognized for being a four time U.S. Champion in the 100m. She was one of the first bilateral above the knee amputees to complete the ambulatory track in the London 2012 Paralympic Games, setting a new American record of 17.33s and finishing sixth in the world.

Sullivan is a motivational speaker and works as a National Coordinator for Hanger Clinic’s AMPOWER Program, a resource and community for amputees. In November 2015, she received the Athletes in Excellence Award from The Foundation for Global Sports Development in recognition for her community service efforts and work with youth.

Previous: Robia Rashid—Writer and Producer, Creator of Atypical, Calls for More Stories of Inclusion and Diversity

Next: Mickey Rowe Awarded for Becoming First Actor with Autism to Perform in The Curious Incident of the Dog in The Night-Time