#RepresentationMatters for People with Disabilities 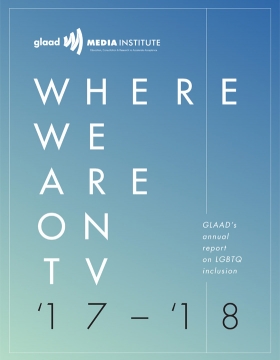 Rockville, Md., Nov. 11 – RespectAbility congratulates GLAAD on releasing the 2017-2018 Where We Are on TV Report, which includes the only analysis of primetime scripted series regulars on broadcast networks of characters with disabilities. Largely known for tracking the number of LGBTQ characters on broadcast and cable networks, as well as streaming services, the Where We Are on TV Report also tracks racial, gender and disability inclusion on television.

The amount of regular primetime broadcast characters counted who have a disability has slightly increased to 1.8 percent, but that number still vastly underrepresents the actualities of Americans with disabilities. There are only two characters across all three platforms that are depicted has HIV-positive, a decrease of one from last year.

RespectAbility agrees with GLAAD that #RepresentationMatters. Just as GLAAD will continue to work alongside the industry to tell LGBTQ stories on screen and further the conversation through their year-round work, RespectAbility will continue to do so for full representation of people with disabilities – including those with disabilities who are LGBTQ.

The entire report may be downloaded from their website. Below, please find the section about the depiction of people with disabilities on television:

This is GLAAD’s eighth year of tracking number of series regular characters on primetime broadcast scripted series who are depicted as people with disabilities. According to the 2016 American Community Survey conducted by the U.S. Census, 12.8 percent (40.7 million) of U.S. noninstitutionalized citizens are living with an apparent disability. In its count, GLAAD included characters who would be covered under the Americans with Disabilities Act (ADA), which includes people living with non-apparent disabilities such as cancer or HIV and AIDS. Inclusion of those disabilities would greatly increase the figures found by the U.S. Census Bureau.

While the percentage of series regular characters living with disabilities on broadcast has increased this year, primetime programming continues to fall short in reflecting the reality of this demographic. This year, the percentage and number of series regulars with disabilities has risen slightly to 1.8 percent (16 characters) from the previous year’s 1.7 percent (15 characters). This is the highest percentage of inclusion since GLAAD began gathering disability statistics in the 2010-11 season.

This year, ABC leads the five broadcast networks in representations of regular characters with disabilities with five (2.3 percent) characters. ABC includes the lead character of Dr. Shaun Murphy on the new series The Good Doctor, who is living with Asperger’s and has savant syndrome, JJ DiMeo on Speechless who has cerebral palsy, and new character Jocelyn Turner on Quantico, who is deaf. ABC also counts two LGBTQ characters with disabilities with Dr. Arizona Robbins (Grey’s Anatomy) who is an amputee, and Oliver Hampton on How to Get Away with Murder who is HIV-positive.

On CBS, Patton on NCIS: New Orleans and Adam on Mom use wheelchairs, Matty (Meredith Eaton) from MacGyver has dwarfism, and a character on Scorpion has been diagnosed with obsessive compulsive disorder and anxiety.

REPRESENTATION OF CHARACTERS LIVING WITH HIV AND AIDS

There are still many stigmas and misconceptions about people living with HIV and AIDS. Two years ago, GLAAD partnered with AIDS United and The Elizabeth Taylor AIDS Foundation to release a media guide for best practices on talking about HIV and AIDS without reinforcing negative stereotypes and helping to end stigma. Television is a powerful tool to help educate and inform the public about those living with HIV and AIDS. Unfortunately, across all of the platforms tracked (broadcast, cable, and streaming services Amazon, Netflix, and Hulu), there were only two HIV-positive characters.

How to Get Away with Murder on ABC continues to break new ground with Oliver’s story and normalizing him living with HIV. It is presented as just another facet of his life, as opposed to an obstacle to overcome. Oliver is also the only regular character on all the platforms tracked to be HIV-positive. On the most recent season of Amazon’s Transparent, audiences learned that recurring character Davina is HIV-positive. The story did not change the way any characters viewed Davina, which is a step in the right direction. There were no HIV-positive LGBTQ characters on cable.

The GLAAD report is based on self-reporting by the networks and content providers. Counts are based on original scripted series premiering or which are expected to premiere a new season in primetime between June 1, 2017 and May 31, 2018 for which casting has been announced and confirmed by networks. However, there may be an instance where a character, such as NBC’s This is Us’ Jack Pearson, who has an alcohol use disorder, Randall Pearson, who has anxiety, and Kevin Pearson, who becomes addicted to opioid pills; as well as Rebecca Bunch, who has anxiety and depression on The CW’s Crazy Ex-Girlfriend, that may not be reported and included. Even so, characters with disabilities still are woefully underrepresented in comparison to the number of people with disabilities in the U.S.

The issue is prevalent in film as well. According to a recent report by The Media, Diversity, & Social Change (MDSC) Initiative at USC’s Annenberg School for Communication and Journalism, only 2.7 percent of all speaking or named characters in film were shown to have a disability in 2016 (up from 2.4 percent in 2015). None of the leading characters were from an underrepresented racial/ethnic group or the LGBT community.

Furthermore, the Ruderman White Paper on Disability in Television shows that disability often is absent from mainstream film and television — both the depiction of it, and even when a character has a disability, the actor often does not. According to the report, an actor pretending to have a disability plays more than 95 percent of characters with disabilities.

In reality TV, A&E Network’s critically acclaimed and award-winning original docuseries Born This Way’s showed that disability is a winning theme. This series starring a cast with disabilities, which received six Emmy nominations this year, won two Emmy’s at the Creative Arts Emmy Awards for Casting for a Reality Program and Cinematography for a Reality Program – after bringing home the Emmy for Outstanding Unstructured Reality Series in 2016.

“Programs like Born This Way that feature people with disabilities, or that tackle disability issues in a positive light, can be successful both critically and financially.” RespectAbility President Jennifer Laszlo Mizrahi said. “Audiences want to see strong, capable role models with disabilities. By focusing on showing these young individuals’ everyday life choices regarding employment, living independently and dating, Born this Way breaks down stigmas surrounding disability.”

Executive Producer Jonathan Murray says that shows like Born This Way and more diversity in Hollywood are good business.

According to the U.S. Census, one in five Americans has a disability. Currently 70 percent of working-age people with disabilities are not working — even though most of them want jobs and independence. Many studies show people with disabilities can work successfully and live relatively independently. The individuals on Born this Way prove this since several are productive employees and one is a business owner herself.

Previous: The Stramski Children’s Development Center Offers a Variety of Programs for Children with Neurodevelopmental, Genetic, Craniofacial and Psychological Disabilities

Next: Coby Bird, Actor with Autism, to Guest Star on The Good Doctor