Coby Bird, Actor with Autism, to Guest Star on The Good Doctor 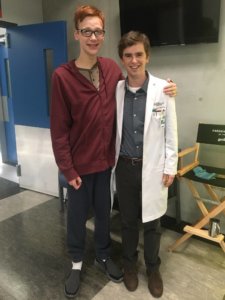 Los Angeles, Nov. 12 – On Monday, Nov. 13, Coby Bird will be a guest star on ABC’s The Good Doctor. Bird was diagnosed with autism at the age of five. At fifteen years old, he stands out in the crowd at six feet tall.

Bird plays a patient with autism who causes the main character, Dr. Shaun Murphy, to reflect on his own diagnosis of autism.

Murphy is a doctor with autism and savant spectrum played by Freddie Highmore, who is not on the spectrum. The doctor takes on the case of a patient with autism (Bird).

“You’re scaring him,” Murphy says in a preview. “He’s not psychotic; he’s autistic.”

Bird’s character, who feels comfortable with Murphy, requests him to be his surgeon. Murphy’s supervisor has yet to let him do a real surgery.

Coby Bird, Actor with Autism, Paving the Way for Actors with Disabilities

For the past four years, Bird has trained with Los Angeles theater company The Miracle Project, an award-winning theater program for children and teens on the autism spectrum.

“There is an enormous untapped potential of individuals with disabilities who are talented actors to play their own roles as people with disabilities,” Hall said. “We hope that showrunners will continue to collaborate and develop this talent pool through these opportunities.”

Last year, Bird also guest starred on an episode of Speechless as a character with autism.

Bird is represented by Gail Ford Williamson of the Kazarian/Measures/Ruskin Diversity Department. Williamson represents more than 300 performers with disabilities.

“Coby is a wonderful young actor on the spectrum who has won the hearts of casting directors and producers,” Williamson said. “He often auditions for roles that casting is looking for adults to play, but once they see Coby’s skills, they have no problem hiring a minor and accepting the extra expense and limited work day.”

Portrayal of Autism on The Good Doctor

The Good Doctor has the opportunity to showcase multiple with autism at different places on the spectrum to show the true diversity. One such possibility would be showing the hospital becoming a Project SEARCH site, which also would be a great way to hire actual actors with autism.

Project SEARCH is a one-year, school-to-work program that takes place entirely at the workplace. This innovative, business-led model features total workplace immersion, which facilitates a seamless combination of classroom instruction, career exploration and work site-based training and support. Unlike other many other transition programs, Project SEARCH boasts a 70 percent success employment rate following the program.

“I am confident that The Good Doctor will continue do much more than merely entertain although it is highly entertaining,” Hall said. “I believe it could change the way the world perceives disability.”

Indeed, there are successful surgeons with autism and other disabilities in the real world and ABC has highlighted this in a 20/20 presentation, including Dr. Tyler Sexton, a pediatrician with cerebral palsy. ABC used the short segment on Sexton, and profiles on other doctors with disabilities, as companion pieces to the show.

It also is important to note that several of the visual effects artists hired for the show are on the autism spectrum.

Previous: #RepresentationMatters for People with Disabilities