Seanese: A Talk with Sean and Sandra McElwee of A&E’s Born This Way 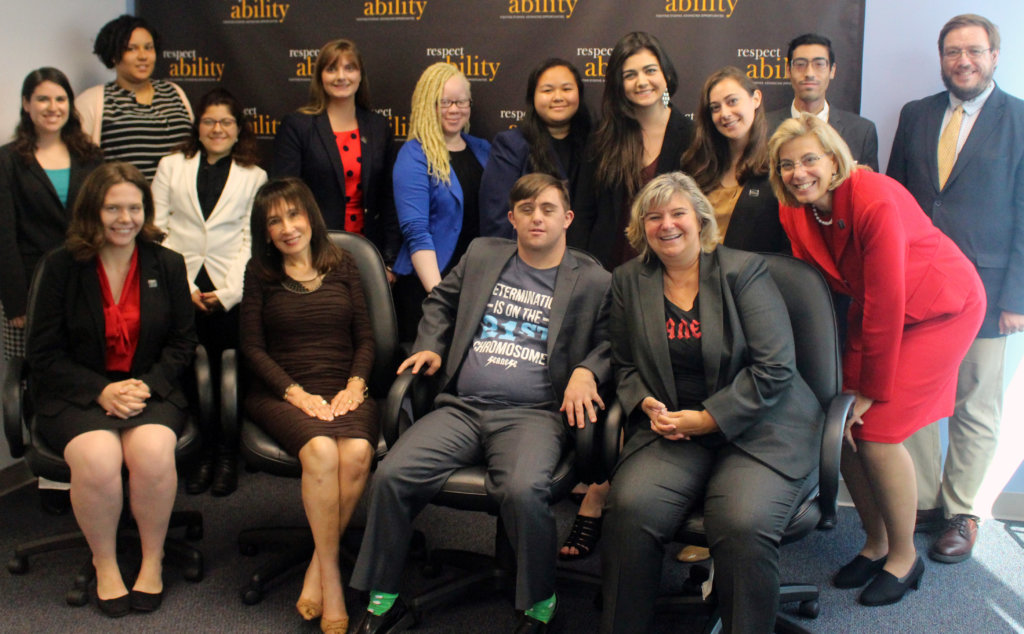 Sean and Sandra McElwee with RespectAbility Fellows and Staff

Rockville, Md., Oct. 7 – Sean and Sandra McElwee walked into the conference room and handed out brightly colored brochures for Seanese, Sean’s new t-shirt company, to RespectAbility staff and fellows on Wednesday morning. Sean asked a few Fellows what their favorite shirt design was as they looked excitedly at the brightly colored sayings in Sean’s trademark language.

Sean and Sandra had a busy week visiting the Washington, D.C., area, which included lobbying for the National Down Syndrome Society on Capitol Hill and participating in the Northern Virginia Buddy Walk. They also visited the site of the Battle of Gettysburg during the Civil War.

The battle for Sean’s civil rights started when he was born, and the doctors’ first words to Sandra were, “I’m sorry.” Sandra thought Sean was dying when they said that.

“You have a baby with Down syndrome; the doctor starts off with, ‘I’m sorry,’ when they deliver the diagnosis,” Sandra explained. She said that doctors follow that sentence with a long list of things a child with Down syndrome will never do.

Since Sean was born, he has held multiple jobs, auditioned for acting roles, started his own business and lived in his own apartment with live-in aids and a roommate.

Sean may be best known for his starring role in the Emmy award-winning Born This Way. Produced by Bunim/Murray Productions, Born This Way, an unscripted reality show on A&E, follows a group of seven young adults with Down syndrome along with their family and friends in Southern California. Because its focus is on showing their everyday lives, including employment, efforts for independent housing, love-lives and more, Born this Way breaks down stigmas surrounding disability.

Sean is a public speaker, as well, which is how Seanese got started. He and his mother were driving in Los Angeles in the rain when Sean thought about all their speaking events together. Sean said that he though his speech was boring. He needed a new presentation.

“I came with a new presentation that’s called, ‘That’s What Faith Can Do,'” Sean told the RespectAbility team.

Sandra listened to Sean. A lot of what he said was compelling, so she took out her recorder and documented what he said in the car. When she went home, she arranged it all into a PowerPoint presentation and went over it with Sean. He told her to rearrange and replace some content, and when they were done, that became his new presentation. 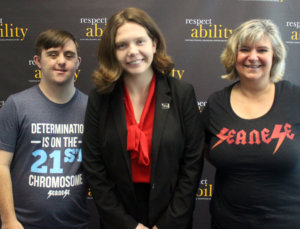 They took some key quotes from the presentation and made them into designs for shirts, hats, bags and hoodies. Then they took some of his most famous quotes from Born This Way and did the same thing.

Growing up, Sean and his family had joked that he spoke his own language, Seanese, and now the name of that language became the name for his new business. The brochures feature a picture of Sean with a t-shirt that says, “I speak Seanese” in front of a California boardwalk. Above him, the slogan reads, “Seanese: Because I speak my own language.”

“This is the key—listening to Sean’s ideas, because he comes up with some that I wouldn’t think of myself,” said Sandra.

RespectAbility is a nonprofit organization fighting stigmas and advancing opportunities for and with people with disabilities. This fall 10 Fellows have the opportunity to learn from a variety of guest speakers. Learn more about the National Leadership Program and apply for the next cohort! Contact [email protected] for more information.