Sherman Oaks, Calif., Oct. 7 – The Good Doctor, which ABC just awarded a full season, features a young surgeon on the autism spectrum who thinks in terms of visual images. What viewers may not realize is one of the show’s visual effects artist thinks in the same way. 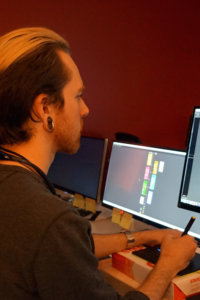 After completing EM’s vocational program, beginning part time and then full time for the last two years of the three-year program, Dugan was hired by EM to join its in-house studio in June 2016. A photographer and visual effects artist, Dugan is a very visual thinker. What viewers see when they watch The Good Doctor, Dugan sees in his life.

Dugan is one of five EM employees who completed split-screen shots for the first two episodes for ABC’s new series. Dugan, as well as Patrick Brady, Eli Katz, Tiana Fazio and Mason Taylor worked on split-screen composition, which involved creating a single, seamless shot from multiple takes. They combined two different takes of a scene using the performance of one actor from one take and another actor from a second take. Instead of reshooting, visual effects artists blend them together so it looks like it was the same take.

Exceptional Minds Executive Director Ernie Merlán said Dugan is a “star in our studio.” A quick worker, Dugan is making more money than anyone else in the studio because he is able to complete multiple shots. “His obsessiveness with detail has served him well in the job he is doing now,” Merlán said.

Dugan said his autism, as well as his ADHD, is an advantage for his career.

“I feel like it helps me in what I do. I get hyper-focused on whatever I’m working on. My ADHD sometimes makes me struggle to sit down and pay attention. With this work, because I’m interested in it, I can focus better than a lot of people.”

In The Good Doctor, the lead actor does not have autism himself, though he plays a doctor who does. While Dugan said he does not think it should be a requirement for the actor to have the disability he is play, he said it is important that consultants make sure the actor is doing so properly and not just based on stereotypes.

Dugan also talked of the importance of people with disabilities having the option to be employed both in front of and behind the camera.

“It’s better if someone has a disability to be more independent,” he said. “Then they don’t have to rely on the government or their parents taking care of them. They’ll also be a lot happier.”

“Being in a career helps a lot with my symptoms,” Dugan added. “It gets me a lot more focused, wanting to wake up and do everything I need to do during the day.” 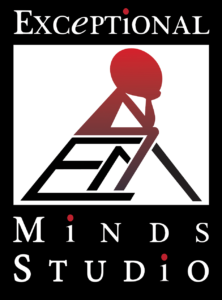 EM currently has 34 full-time students, with an additional 50 studying part-time or virtually. Last summer 135 students participated in summer workshops. Students learn both animation and visual effects before choosing to specialize in one. Thus far, 35 students have graduated, 15 of whom are working in the in-house visual effects studio and four at the in-house animation studio. An additional seven people were placed at external studios. All of these students and graduates are on the autism spectrum.

EM classes teach not only the technical aspects, but as Dugan says, “also cover the behavioral side, preparing me in how to deal with that aspect of a career and how to act.”

Growing up in Manhattan Beach, California, Dugan was “not a huge fan” of the K-12 system’s special education program. After graduating, he went to a couple of colleges for a semester and tried a vocational school to learn Adobe programs while he was deciding what he wanted to do. Then, his father, a television producer, told him about EM, which Dugan said “definitely changed my life for the better.”

In the past year and a half, Dugan has worked on several movies and television series including: Doctor Strange (removing a boom mic in the shot); War for the Planet of the Apes (removed tracking markers); The Mummy (removed light spillage) and Atypical (replaced license plates on cars to change the location).

For those graduates who find external jobs, Merlán explained that EM not only provides training for the employee but also coaching for employers as well as support for both the employer and employee once the individual begins the job.

“Our whole goal is to get these guys work and let them accomplish their dreams just like everybody else,” Merlán said.

“We are looking to change hearts and minds,” Bennett added. “We need people in the film industry who are not all the same; diversity is a blessing.”

Previous: Seanese: A Talk with Sean and Sandra McElwee of A&E’s Born This Way

Next: Speechless Puts the Spotlight on Inclusive Education