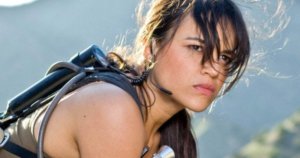 Michelle Rodriguez on set of Fast and Furious

Rockville, Md., Oct. 15 – Known for her sexy and confident female roles in Lost and Fast and Furious, Michelle Rodriguez, a Hispanic actress, now has set her eyes on writing and directing movies.

“I want to write and direct, but it’s not easy with ADD. I have a hard time focusing when I’m alone. I’m a scatterbrain, but I’m nervous of taking medication, I don’t really want to depend on anything to control my brain,” Rodriguez said in an interview with World Entertainment News Network (WENN).

Rodriguez has Attention Deficit Disorder (ADD), which led her to being expelled from five schools. She dropped out of high school but earned her GED privately. At the age of 17, she moved back to the U.S., where she resided in New Jersey. She attended business school but would leave for short periods of time to pursue acting as a career.

Her first professional acting job was acting as an angry boxer who wins and earns respect, discipline and romance in Girlfight (2000). The film won Best Directing Award and Grand Jury Prize in the Sundance Film Festival in 2000, earning Rodriquez fame on every news cover, but she was not fond of the attention.

“I don’t like it,” she said to Hollywood.com. “It makes me feel uncomfortable. I don’t think it’s genuine the majority of the time. It doesn’t make me feel that great. I mean, I take a dump just like you do, it’s all the same. I don’t get the point of it all.”

Rodriguez later stared in movies such as SWAT and Avatar, as well as the series Lost. Recently, she was a main character in the franchise Fast and Furious. However, she is now at a point where she is fighting for woman’s rights and how women are being portrayed in the Fast and Furious movies. She even threatened to walk away from her role.

“I hope they decide to show some love to the women of the franchise on the next one or I just might have to say goodbye to a loved franchise,” she said in an interview with CNN. “It’s been a good ride and I’m grateful for the opportunity the fans and studio have provided over the years.”

Rodriguez hopes to become a screenwriter and direct her own movie in the future. Studies show many people within the Latino and other communities hide their invisible disability due to negative stigmas, but Rodriguez has been outspoken about her ADD, educating people about her disability. Therefore, she is the perfect candidate for RespectAbility’s #RespectTheAbility campaign, which is highlighting individuals with disabilities who are extremely successful in their chosen career.

Our nation’s economy is strongest when it is inclusive of the value that diverse talent brings to the workplace. Celebrities like Rodriguez are making a difference.

Previous: Jeison Aristizábal—CNN Hero of the Year 2016 and Nonprofit Founder with Cerebral Palsy

Next: Selena Gomez Serves as Role Model for Young Women with Disabilities