How and Why Did Cambodians Settle in Long Beach, California 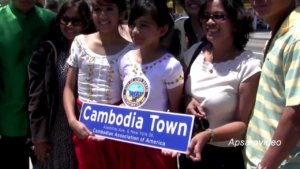 In the 1950s and 1960s, Cambodia and the United States created a program for Cambodian students to attend California colleges and universities. The students learned about agriculture, industrial arts and engineering. After students completed their degrees, they returned to Cambodia. When Cambodia ended diplomatic relations with the United States in the mid-1960s, the program ended as well. However, several students decided to remain in the United States permanently. When the first wave of Cambodian refugees came to the United States at Camp Pendleton, California, which was 70 miles south of Long Beach, the former students visited the refugees. The former students brought them meals and supplies; they ended up sponsoring refugees to earn their citizenship and to help them adjust to life in a foreign country. This student support system resulted in the formation of the Cambodian Association of America, which attracted subsequent refugees who came to Long Beach after the Cambodian genocide because of the Association’s ability to help the refugees adapt to life in the United States.

In April 1975, refugees left Cambodia when the Communist Party of Kampuchea took control of the country. Frequently referred to as the Khmer Rouge, the regime had one goal: to create a communal utopia where everyone worked on farms. Production and distribution of goods were based on the Socialist principle: “From each according to his ability, to each according to his needs.” On April 17, 1975, Khmer Rouge soldiers invaded the capital Phnom Penh and seized control. Soldiers forced residents out of their homes, hospital patients out of their beds, and made them walk to the countryside. Civil rights, politics and private property were abolished. Schools and colleges were closed and used as army bases. Medicine and hospitals were destroyed as part of erasing modern institutions. To accomplish their goal, the Khmer Rouge killed 90 percent of the country’s middle and upper class – doctors, lawyers, teachers, business owners and anyone with an education who might rebel. In less than four years, two-million people died from starvation, exhaustion, diseases or executions.

In response to the extenuating circumstances and substantial number of refugees who were seeking asylum in the country, Congress passed The Refugee Act of 1980. The act established an Office for Refugee Resettlement (ORR) with branches in every state that would determine where refugees would live. The intent of the ORR was to spread refugees evenly throughout the country to avoid putting financial, educational and social-services strains on one branch and community. To decide where refugees would be placed, the ORR focused on several factors. One was finding sponsors for refugees. The ORR wanted to find sponsors who could house refugees temporarily, and help them find their own housing and employment. In addition, the ORR wanted sponsors who could assist refugees with paperwork for support from community service agencies and state welfare programs. Moreover, the ORR searched for sponsors who could help refugees enroll their children in schools, enroll them into English language programs and health care. Another factor focused on was determining if refugees already had family and friends in the United States who could help the refugees. The ORR also searched for cities with a lot of inexpensive housing and entry-level jobs that did not require an ability to understand and speak English.

After the welfare reform in 1996, it was difficult for Cambodians to prepare themselves for work while properly addressing the post-traumatic stress disorder that resulted from living under the Khmer Rouge regime. Today, Long Beach is the home for multiple Cambodian business owners of grocery stores, restaurants, beauty salons, clothing stores, photography and more. The city is continuing to grow and progress, which is visible with new properties, retail and transit. Through various community organizations, Cambodian food, festivals, dance and music, the local Cambodian community is healing slowly. The Cambodian community in Long Beach is focused on improving the social and economic development of residents, preserving Cambodian heritage and culture, and supporting Cambodian youths to be successful.

As the first generation of my Cambodian family born in the United States, I did not truly understand why and how my family made their way here. I thought they had an American dream and wanted more opportunities for a better life. What I later learned in my sixth-grade history class was that my family survived the Cambodian genocide and came to the United States as refugees. The United States Department of State describes refugees as people who had to leave their home country and cannot return because of “a well-founded fear of persecution based on religion, race, nationality, political opinion or membership in a particular social group.” This definition does not adequately convey how my family suffered but then thrived in the United States. I finally understand the sacrifices and experiences my family endured for me to be where I am today. Martin Luther King Jr. declared “The ultimate measure of a man is not where he stands in moments of comfort and convenience, but where he stands at times of challenge and controversy.”

Next: Breaking Out of Inequitable Practices in America