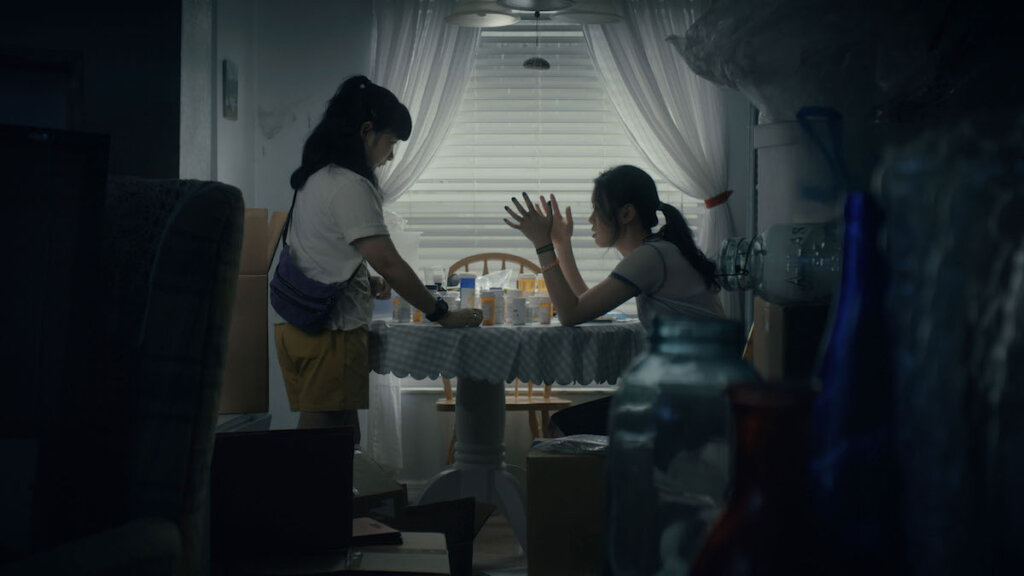 Jeena Yi and Anna Sargent in Take Me Home. Courtesy of Sundance Institute.

Park City, Utah, Jan. 25 – After winning the Julia S Gouw Film Challenge in partnership with Janet Yang Productions and the Coalition of Asian Pacifics in Entertainment, the short film Take Me Home had its world premiere at the 2023 Sundance Film Festival.

The short follows a cognitively disabled adult named Anna who lives with her aging mother in Midland, Florida. When her mother is unresponsive, Anna calls her sister Emily for help. Unable to articulate in a way that Emily truly understands, Anna is brushed aside.

It isn’t until Emily comes home from work that Anna’s concerns are validated. What follows is a seemingly hopeless struggle for Emily to lay out a plan for Anna moving forward. A particular point of contention centers around what Anna’s daily medication is supposed to be. Without their mom, there’s a disconnect between how the two sisters communicate. In the end, it’s Anna whose straightforward strength and ability to see the bigger picture that fosters a reconciliation between them, culminating in Anna expressing her desire to be independent and get her own place to live.

What makes Take Me Home separate itself from the lexicon of films in the same genre is its filmmaking approach. The writer/director Liz Sargent works with the director of photography Minos Papas to create a documentary-esque feel to the project that is as deeply human as it is visually captivating. Whether it be the opening low angle shot of ants acquiring food for their nest, a static shot of a spinning ceiling fan, or a close-up of several pairs of eclectic sunglasses, the film takes its time to show the viewer the world that Emily and Anna live in rather than simply living in the drama of human discourse.

This technique is applied to the acting and dialogue as well. “Big moments” are few and far between. There isn’t a dramatic diatribe or heavy dialogue scene where the actor is clearly demonstrating their acting chops. Rather, the film’s currency is that of understated performances. Emotionally poignant moments are grounded in the subtext and body language of the actors.

On a technical basis, the film deliberately uses muted color tones until the final scene of emotional catharsis finally utilizes a scene with more color saturation, giving the moment an added flair for emotional poignance. Additionally, the score throughout uses soft guitar strings to paint a picture of beautiful melancholy. With very minimalistic evolution of the score by the final scene, it’s as if the composer is saying: it’s not the world that’s changing, it’s our perspective on it.

The project is a sister collaboration, with the main role of Anna also played by Liz’s sister Anna Sargent, who was born with a cyst on her brain leaving her with little short term memory and various degrees of cognitive and physical disabilities. Take Me Home is her acting debut but she steals every scene that she’s in. She plays opposite Jeena Yi, who comes from an established professional background with recent credits on many notable streaming services. She serves as the entry point for the audience to see into Anna’s world, and brilliantly navigates the difficult role of feeling like the world is on her shoulders and there’s no one to help her. In the end, it’s when Emily sees Anna for who she truly is, an independent fully capable woman, that she realizes that she doesn’t have to navigate the uncertainty of the future alone.

Jeremy Hsing is an Entertainment and News Media Apprentice at RespectAbility. Hsing is a graduate of UCLA with a specialty in sci-fi/drama TV writing. He is passionate about using his psychology background and lived experience as a second-generation Taiwanese immigrant to amplify the voices of underrepresented communities. When Hsing started his undergraduate education, he had a series of debilitating panic attacks that led him to seek professional mental health resources and was then diagnosed with generalized anxiety disorder. Since then, he has unlearned the stigma surrounding mental health and devotes his life to telling stories to educate and inspire others to seek therapy in hopes of achieving emotional catharsis.

Previous: “Is There Anybody Out There?” Explores Autonomy and Ableism

Next: Owning Your Narrative with “Still: A Michael J. Fox Movie”