Ableism in the Workplace 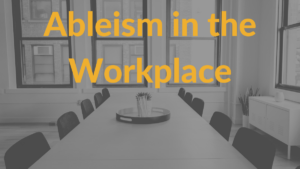 Today it’s rare to see overt examples of ableist attitudes and actions such as those presented in this DramatizeMe video where a group of job applicants aggressively push away a competing applicant, who’s using a wheelchair, from the elevator to prevent him from getting to the interview on time. Now, ableism presents itself in more subtle ways, including:

Sometimes even well-meaning co-workers might make ableist mistakes like the above because of unconscious bias. Christine Liu of the Harvard Business Review says that handling such errors is important and that one needs to learn from them.

Hiram Helfman has a Bachelor of Arts in International Affairs and a Master of Arts in Diplomacy. He has spoken at disability awareness events as part of the University of Central Florida’s Center for Autism and Related Disabilities.

Previous: Disability and Horror: Showing The True Terror of Ableism