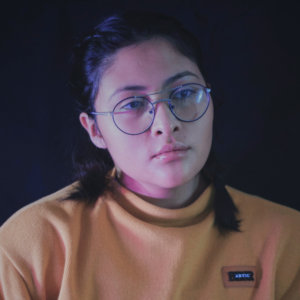 After becoming paralyzed in 2005 from a spinal lymphoma, Villatoro found her love of art as she struggled to transition to her new life. Taking photographs and videos became the perfect medium for self-expression. Villatoro went on to take every video production class offered in school and eventually received her B.A in Cinema and Media Arts from Biola University in Southern California. This is where her love of cameras translated into a passion for film and story. Since then, her work has focused on the real life narratives of underrepresented minorities ranging from undocumented migrants to individuals with disabilities. As a Latina with a disability, Villatoro very quickly came to understand her role in fighting for on-screen representation that is accessible and intersectional. Her current portfolio includes documentary short films, virtual reality projects as well as installation pieces. She has also taken on the role of producer on multiple short film projects such as SATISFACTION directed by J. Creasman. Villatoro’s goal is to become a director of photography on projects that highlight the experiences of those with physical disabilities.