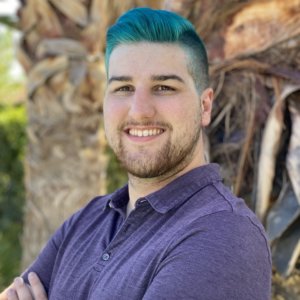 Domenic Vermeulen (He/They) is a Production HR Coordinator for Lionsgate Entertainment, where they work to implement Harassment Prevention and Diversity Training for productions across the company’s Television and Motion Picture groups. They also work alongside Lionsgate/STARZ’s Office of Diversity, Equity, and Inclusion on the DEI Committee, and hold a seat on the company’s Production Inclusion Coalition.

Formerly, Domenic worked as a Physical Production Coordinator for A+E Studios, where they also served as the Founder/Co-Chair of Pride @ A+E Networks, Co-Chair of the Employee Resource Group Diversity Advisory Council, and a Board Member of the company’s Human Impact Team, assisting in the cultivation and shaping of community within A+E’s domestic and international offices.

Outside of their work at Lionsgate, Domenic is on the Development Advisory Board for The Dru Project. They currently reside in Cathedral City, CA with their partner, Matty, and Frenchie statue, Herbert.