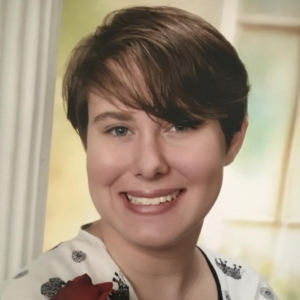 Emily Borses is a 21-year-old aspiring filmmaker based in Los Angeles who is also part of RespectAbility’s Speaking and Training Bureau. Emily’s family is very artsy, especially her dad. When she was growing up, he introduced her to 60’s-era punk rock music like Led Zeppelin, Heart, ZZ Top, and The Foo Fighters. She also developed an appreciation for writing, poetry, and photography, all of which are essential components of film! It wasn’t until Emily was watching the film Juno with her dad, and deeply analyzing the way Elliot Page portrayed his character, that her dad pointed out that she would be great at filmmaking and analysis.

Even as she was discovering her artistic passion, Emily was living with an anxiety disorder that was not diagnosed until her junior year of high school. Looking retrospectively at her childhood in light of the diagnosis, she realized that film has really been a key component to her recovery and a coping skill for her anxiety.

From the age of 10, Emily has been involved in theatre, which became her entrée into the film world. She related that film allowed her to feel heard through all the “noise” of her anxiety disorder and provided a means for her to be her true and authentic self. It has also provided Emily with a myriad of wonderful opportunities and connections, including filming on the lot of Universal Studios, which she hopes to resume once COVID has settled down.

These same factors have impacted Emily’s Jewish journey. At the age of 13, while struggling with her undiagnosed anxiety disorder, Emily was encouraged by adults in her life to have her Bat Mitzvah, but she always found her relationship to Judaism to be complex. As a child, she had learned about the Holocaust through Stephen Spielberg’s Schindler’s List, which triggered a lot of anxiety.

Identifying as both queer and Jewish, Emily learned that not everyone in society was going to like her for these identities. Especially after being triggered by seeing Schindler’s List, Emily was quite nervous to publicly identify as Jewish. Ultimately, being Jewish taught Emily that people in society will not always like and/or accept people’s various identities, but she should not let that keep her from embracing her Jewish identity.

She also embraces challenge, and it leads her to interesting places. Despite the intense anxiety associated with seeing the film, she finished watching Schindler’s List over a duration of several weeks. Though uninterested in watching any other Holocaust film, she watched this one because of the artistry of Stephen Spielberg. The way Spielberg made this black and white film, chaotic yet comprehensive, is how Emily would make her own black and white film.

If you ever need any new film recommendations that are disability inclusive, Emily is your go-to person! She is incredibly well versed in representation and inclusivity in film and media. While it was hard to narrow it down to just one, Emily’s all-time favorite disability inclusive film is Ordinary People. This coming-of-age film taught Emily that her disability is not a barrier. Emily met her best friend at the same time that she discovered this film, and this has reinforced the connection between Emily and the film.

Emily’s films will combine her personality with the traits of filmmakers and producers who are bold and outspoken in their writing, such as Nora Ephron and William Goldman. They are bold screenwriters who are not afraid to go against the grain and are unapologetic in their work. Emily’s journey of self-discovery has allowed her to recognize that, in order to write, she also has to direct and be her most authentic self. Being as real and authentic as she can be is the only way for her to do her best work.

Emily is currently working on several scripts for coming-of-age films, and a horror film or two. RespectAbility is privileged to work with film Festivals where we see the amazing talent of all types of writers and directors with disabilities, and we hope one day to see Emily’s work in one of those places. For now, you can hear more about Emily’s story by reaching out to Jake Stimell to book her as a speaker. You can reach him by emailing [email protected].