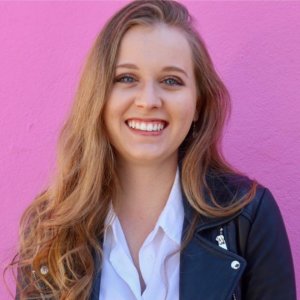 Los Angeles, CA, July 28 – On the first of two days led by the Walt Disney Company for RespectAbility’s 2021 Summer Lab, participants had the opportunity to speak with 2019 Lab alumna April Caputi about her career journey since graduating from the Lab. Caputi, who previously temped as a Talent Casting Coordinator for Disneyland Live Entertainment before becoming a Casting Assistant for AMC Network’s show This Close (which was created, written by, and starred Deaf actors), joined the Disney team as a part of the Executive Incubator Program.

“One thing that attracted me most about the Lab program was that you get face time with executives from all studios and networks,” Caputi said of her experience with RespectAbility’s Entertainment Lab. “It was my dream to work at Disney and I [was] dying to meet executives who [were] looking to hire people with disabilities, and I wanted to connect my goals with theirs.”

After facing numerous rejections from other applications, Caputi credits RespectAbility for not only connecting her with Disney but also giving her the confidence to enter Disney with a positive mindset.

“The whole sense of community that they provide, and how they normalize disability to the executives and the studios and the networks, and just being in that environment long enough helped me to get into the mindset that it was okay to be disabled in front of these executives, and it’s okay to ask for accommodations and ask for needs.”

Moving through the Executive Incubator Program as a Creative Associate, which Caputi compares to a two-year master’s program, she was able to explore all different aspects of working as a Creative at Disney from Marketing to Casting Departments. She shared with current Lab participants projects like Freeform’s social series, Questions To Stop Asking People, which includes a spot on Cerebral Palsy, which she co-produced, where she felt she had the greatest impact and was able to advocate for inclusion and employment for others in the Disability community.

Creating community for Disabled creatives is a key part of Caputi’s work, and the driving force behind the outside of title accomplishment she says has been most fulfilling: Enabled L.A., a disability business employee resource group which began unofficially but now has over 418 members and other Enabled groups across the Walt Disney Company. “I feel like my creativity and innovation can flourish in those areas because it was outside of my job title,” she shared. “I had just as much of a passion to influence in many different areas and not just [as a] creator…I worked with people of all different businesses [to] make a disability impact for whatever project they may have, and so that’s what I’ve been doing outside of my job and I love it.”

Next: Seeking Blind and Low Vision College Graduates for Careers in Policy and Nonprofit Management