The Bachelor Season 25’s Frontrunner is a Deaf Contestant, and She’s Already Stolen Our Hearts 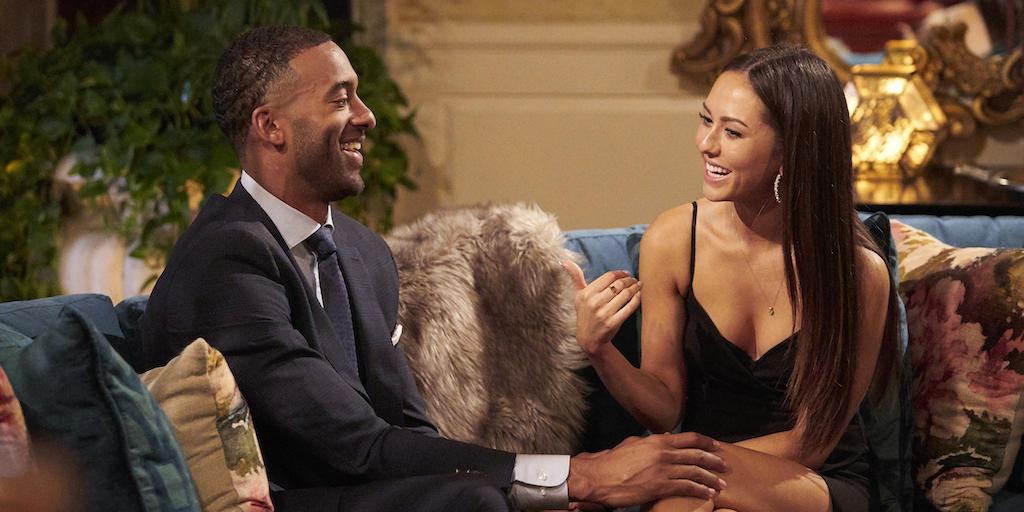 Los Angeles, Jan. 7 – Monday night saw the season 25 premiere of The Bachelor. This season has been highly anticipated, with the lead Matt James as the first Black Bachelor in the show’s history, and a lack of diversity is a longtime criticism of the show. The show also broke tradition by selecting James as the lead, who has never participated on the show. Leads are usually fan favorites from previous seasons.

James’ naivete and newcomer status comes as a refreshing change as I noticed little things that he did that were different from other leads who were following the direction of producers or what they had seen in past seasons. In another historic move, James chose Abigail Heringer, a deaf contestant, to receive his First Impression rose.

“So, there’s something a little bit different about me,” Heringer said to James when they first met. “And that is I’m deaf. So, I’m going to be reading your lips a lot tonight, but thankfully you have really beautiful lips. So, I’m not complaining!”

“I love that! I’m going to enunciate for you,” James responded.

For those unfamiliar with the show format, about 25-30 women (or men if it’s The Bachelorette) vie for the love of the lead. Each week follows the lead as they choose women to go on dates, and at the end of each week, the lead will eliminate several women, handing out roses to the women he wants to keep. On the first night, the lead will meet the women for the first time and choose one woman to receive the First Impression rose, a strong indicator that they will be a contender and a solid love interest.

Say what you want about the superficial nature of dating on national television, but this season is already a win for representation with James as the first Black lead and Heringer as the first deaf contestant on The Bachelor, showing that people with disabilities can indeed be love interests. In fact, James noted that one of the reasons he chose Heringer is because of her vulnerability and openness to talk about her disability. Moreover, as a member of the AAPI community, Heringer’s half-Korean intersectional identity reaffirms the notion that disability intersects with all other underrepresented populations.

Abigail Heringer, 25, is a financial analyst from Portland, Oregon. She was born with congenital hearing loss and received a cochlear implant at the age of 2. Heringer is already an early fan favorite. Reddit threads, Facebook groups, and her Instagram comments all “rooting for her,” and several parents of deaf children noting that her appearance on the show is incredibly meaningful. In an interview with the Statesman Journal, Heringer’s mother Suzie Heringer said, “With her disability, if that can impact one other person, it’s worth sharing the story.”

This is not the first time a disabled contestant has participated on the show. Sarah Herron, who is an arm amputee, competed on the show in Season 17. Other contestants also have disclosed their nonvisible disabilities such as anxiety, depression, and PTSD. On the most recent season of The Bachelorette, contestant Ben Smith opened up about his eating disorder, and winner Zac Clark shared his past with addiction. Lily McManus, who is Hard of Hearing and uses a hearing aid, competed on the spinoff show Bachelor Winter Games but did not publicly disclose her disability until after the show’s end.

“Any time anyone sees someone that is ‘different’ from them, [that] expands their minds and offers an opportunity to accept differences,” said Andrew Rosenblum, president of the National Association for the Deaf, in an interview with Yahoo. “The more we see appropriate representation on any form of media, but especially television, the more likely we are to search about whatever it is that is ‘different’ and learn more. This goes for seeing a deaf person on a reality TV show like The Bachelor.”

This holds true, as Google searches for “cochlear implant” increased Monday night after the season premiere. As the season progresses, I know I’ll be cheering on Heringer and continuing to celebrate love within the show.

Heringer will be a panelist on RespectAbility’s Asian American and Pacific Islander Heritage Month Panel, Celebrating Representation and Inclusion of Disabled AAPI in Media, where she will be sharing more about her experiences on The Bachelor and her lived experience as a disabled AAPI. It is vital to ensure authentic disability representation, considering that disability intersects with all other underrepresented populations. While AAPI representation in film and television has seen an increase in the past few years, there is still work to be done for AAPI disability representation. In honor of Asian American and Pacific Islander Heritage Month, join RespectAbility for a discussion with AAPI creatives working in front of and behind the camera to ensure inclusive representation moving forward. ASL interpreters and live captioning will be provided. More information and the Zoom registration link can be found here: https://www.respectability.org/2021/04/aapi-disability-event/

Previous: Building the Industry Pipeline for the Future