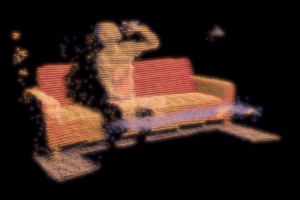 Los Angeles, Jan. 30 – A new short screening at the 2021 Sundance Film Festival, Forever, examines the role of artificial intelligence (AI) in determining the value of a life – including what happens when AI determines one may not live long.

In this animated short experimental film, a man named Mitchell, voiced by the writer/director Mitch McGlocklin, is denied life insurance due to “an advanced algorithm” processing his medical records, criminal background and social history, credit score and social media accounts, ultimately determining he is “too risky of a case.”

What follows is the protagonist narrating his reaction to the news. “I guess the AI thought I was going to die. When I thought of it that way, it hit me pretty hard because I have a lot of belief in AI. I see AI as not really an opinion. It seems like truth.” Ultimately, however, this character finds comfort in that he will live on forever in AI.

McGlocklin said the inspiration for this 7-minute film came from his personal experiences. As a healthy young adult going to university, he was denied a life insurance policy. At the same time, he was learning how AI programs were taking over many jobs, including insurance underwriters.

“So, I felt that AI looked at my life and determined I was going to die soon,” McGlocklin said in an interview with The New Current. “I really took it to heart because I have a strong belief in the capabilities of AI. That experience really lasted with me and shaped my behaviour and outlook on my own mortality.”

He originally was going to turn this story into a real-time VR experience. “As I was explaining the VR experience to people and the inspiration behind it, they were really drawn to the true story that happened to me,” he said in a Sundance Q&A. “So, I realized that it would be better suite as a short film.”

In this short, the reason for this character’s life insurance denial is his long history of antidepressants and a medical record detailing years of alcohol abuse. According to the Americans with Disabilities Act, “an alcoholic is a person with a disability.” 8.9 million men and 5.2 million women in the United States alone have an alcohol use disorder.

What makes this film so interesting is its style of animation – LiDAR, Light Detection and Ranging, a remote sensing method that uses light in the form of a pulsed laser to capture real-life people and places. The particular unit used for this film was developed for self-driving cars, a new form of AI. This type of animation, with its reliance on technology, illustrates how much our lives are intertwined with technology.

“AI uses LiDAR to ‘see’ humanity in accurate detail, but has resolution limitations,” the film’s website states. “In both story and style, Forever explores the boundary of advanced technology and the human experience.”

“One thing I like about the LiDAR is that it cannot capture our likeness the way a camera does,” McGlocklin said in an “about the filmmaker” video for Sundance. “So, this mirrors the idea that AI looks at us with incomplete data, creating a digital facsimile of us that contains inaccuracies. It also has a secondary benefit of allowing audiences to project themselves on to the people in the film. While the film is super personal to me, I believe that audiences can project their own experiences and their own ideas on to the main character.”

Next: Conversations Through the Lens: A 360 View of Disability on Set