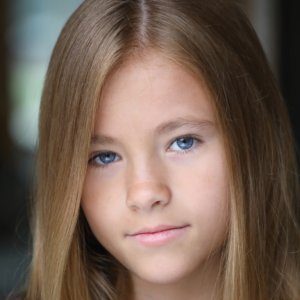 “I’m grateful to have a platform that will give not only Deaf children, but all children to freely speak up, to fight for what they want, and to be fully themselves even if it is not ‘popular,’” Mansfield said in an interview with RespectAbility.

Mansfield draws her inspiration from Daisy Ridley, Gal Gadot and Lauren Ridloff, noting that she is determined to be the next Deaf superhero after Ridloff, who will be appearing in the upcoming Marvel film The Eternals.

Mansfield got her start as a Deaf YouTuber, starring in ASL Nook from 2013-2019 in more than 50 episodes, helping families and children worldwide learn American Sign Language (ASL). Since then, she has starred in unscripted (A&E’s Deaf Out Loud) and scripted television series (SundanceTV’s This Close and Disney Channel’s Bunk’d), as well as feature-length films (Disney+’s Noelle and Netflix’s Feel the Beat).

Mansfield often talks about the importance of showing authentic, Deaf people on screen to inspire Deaf children to be themselves. Her motto, “be myself,” echoes true as she shows authenticity in her roles from quirky to quiet to rebellious to hilarious.

“Most audiences are hearing, and they have one view of what Deaf people are,” Mansfield said, explaining how representation of media can change this. Her most gratifying role to date was playing Willow on Disney Channel’s Bunk’d, where she played Willow, the first Deaf camper. RespectAbility consulted on this episode and Willow’s storyline.

“In other things I had worked on, hearing people often portrayed Deaf people in storylines that drew attention to what they cannot do,” Mansfield explained. “When I came on to Bunk’d, and I read that script, I was like, ‘wow.’ There’s no reference to me being Deaf or not being able to hear or talk. There was nothing like that. That meant to me that this was intentional on the writers’ part that they wanted Willow to be just a regular human camper and that’s what her story was about.” 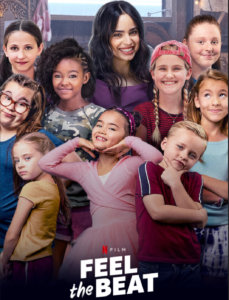 Poster for Feel The Beat

Mansfield’s newest film is Feel the Beat on Netflix, released on June 19. The title itself has such meaning in regard to Mansfield’s character Zuzu literally feeling the beat when she dances. Producer Susan Cartsonis said the team decided on the title halfway through production.

“As we were reviewing a variety of titles, we realized how profoundly the experience of shooting this film with a deaf actress was affecting us,” said Cartsonis. “When a bunch of titles were put in front of us, this one resonated most strongly because it had meaning for how the story was unfolding.”

Mansfield has loved dancing since she was young, often creating her own dances on her own or with her sister. A year ago, she began dancing in a studio in preparation for this film.

“When you look at the world, it is full of people who hear and ‘run by’ sounds,” Mansfield said, reflecting on the title of the film. “Only the very, very few truly feel the beat – often they happen to be Deaf like me.”

Zuzu is part of a preteen dance troupe that competes in a national competition when April Dibrina (Sofia Carson), facing failure in her professional Broadway dance career, returns to her small town and sees the competition as a way to redeem herself.

April initially sees Zuzu’s deafness as a flaw, much in the same way that she sees all of the other young dancers in the troupe, each of whom April initiaully perceived as not meeting her ideal of the “perfect dancer.” She asks Zuzu how she can dance if she is Deaf, believing it to not be possible.

“I feel the vibrations,” Zuzu responds in ASL.

“It is through not only April’s lens but the hearing lens, which often assumes hearing is the best,” Mansfield explained. “There are some Deaf people like Zuzu who march (or shall I say dance) to their own beat. Because when you believe in YOURSELF, rather in the world’s perceptions of you, you shine no matter what. It makes you even more alive. When that happens, people will eventually see that and begin to change their perceptions.”

ASL is integrated into one of the final dances, which Mansfield notes often happens in real life.

“There are many Deaf dancers, Deaf performers on my Instagram, and stage plays that do this,” she said. “Anselmo [the ASL Dialogue Coach] and I brainstormed which words to sign during this number. We decided on the sign FAMILY ALWAYS because we stay together, we work together, we support each other as any family would.”

Cartsonis explained the dance represents the “journey of growth and understanding for the beauty of signing and integration of what might have been pursued as a flaw at the beginning. All of the kids have things that April views as flaws at the beginning but turn out to make them unique and special.”

Cartsonis said she wanted the film to show that regardless of shape, size, race or disability, “we want to say that everybody can dance.”

Assistant choreographer Hailee Payne worked closely with Mansfield on this dance and her role in all of the dances.

“Hailee really went out of her way and tried several ways to work together on connecting the dance moves with the music,” Mansfield said. “Hailee was the one who got past the intimidation stage given that it was a completely new experience for her and me.”

Should there be a sequel or another similar production, Mansfield shared some important advice: “Adding a Deaf choreographer to the team would be amazing, educational, and beneficial for everyone involved.” 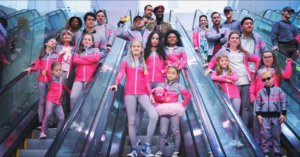 The cast of Feel The Beat

The writers specifically wrote the character of Zuzu as deaf. According to Cartsonis, one of the writers, Shawn Ku, a professional dancer, previously had danced with a Deaf dancer. He wanted to show how Deaf dancers feel the vibrations and showcase interactions with people who experience music differently from others.

As ASL is its own language and all too often Deaf individuals are not involved with the writing process, the dialogue may not be fully accurate when it is translated into ASL. A best practice in disability representation and inclusion for productions is to hire Deaf ASL dialogue coaches, sometimes described as “ASL Masters.” These individuals, who often are trained in dramaturgy, prepare actors for their dramatic performance of ASL dialogue from scripts that are generally written in the English language, carefully selecting signs and nuances of ASL during the translation process that appropriately reflects the character, tone, and scene. In addition to assisting the Deaf actor with translating lines appropriately, an ASL Dialogue Coach also works with hearing actors to help them execute signs correctly, which is essential for believability and shows the audience a respect for the ASL language, which is highly valued in the Deaf community.

“Generally speaking, it is very important to have a truly qualified Deaf (not hearing) ASL dialogue coach,” Mansfield explained. “The ASL dialogue coach’s job is to translate the script into ASL, teach and coach the actors how to sign the dialogues in ASL, provide consultation on authenticity and Deaf culture throughout production, work closely with the director for the accuracy of ASL on camera, and be involved with post-production to ensure ASL is well-represented.”

Mansfield has worked with ASL dialogue coaches on many productions, including A&E’s Deaf Out Loud and Disney Channel’s Bunk’d.

Feel the Beat hired Anselmo DeSousa, a Deaf ASL dialogue coach. In addition to providing support for Mansfield, he created videos of all the ASL in the movie so the actors could practice on their own and was available to the actors to help them correct their sign language performance. Mansfield and her parents, who also are Deaf, often helped other actors learn various signs as well.

“I even showed them how to be more expressive with their faces to give their signs more meaning,” Mansfield said.

Cartsonis said learning ASL became part of April’s character arc: “She starts out curious about how a Deaf child would be able to dance and then becomes inspired by Zuzu’s expressiveness.”

In an interview with Style Caster, Carson said she was grateful to have learned ASL at Mansfield’s suggestion.

“She wanted to be sure that it was as real and genuine as possible to what her experience would be and how the girls and the teachers in class would have to learn sign language to communicate with her,” Carson said. “It was beautiful to have this community that embraced her, loved her and celebrated her rather than isolated her. It was beautiful to see the response from kids seeing themselves in this character.”

Mansfield also taught the cast about Deaf culture. “For instance, my Deaf family uses sign language while some Deaf people don’t, as there are many types of Deaf people.”

And since different Deaf individuals need different accommodations, Mansfield has some advice for production teams who want to ensure authentic inclusion: “The secret for any production to be inclusive is to ask me as well as too let me express my needs as I know what is best for me. What works for me might not work for others.”

Watch the trailer for Feel The Beat below:

Next: Disability Access and Inclusion Training Series Continues This Week