Crip Camp Premieres on Netflix, Bringing Disability Revolution and Inclusion to All

Los Angeles, Calif., March 25 – The groundbreaking Crip Camp, winner of the 2020 Audience Award at Sundance Film Festival for U.S. Documentary, premieres today on Netflix. This film, which chronicles the early days of some of the disability movement’s greatest civil rights advocates, comes at an extremely important time as people with disabilities fight for equal treatment, including that hospitals are not pushed into medical rationing during COVID-19.

Read this reflection by RespectAbility Board Member Neil Jacobson, a former Camp Jened camper, and watch the documentary today: 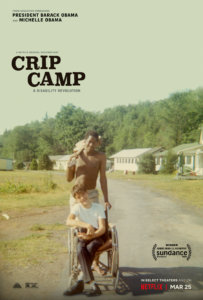 “Crip Camp was directed and produced by Nicole Newnham and Jim LeBrecht and also produced by Sara Bolder in conjunction with Netflix and Barack and Michelle Obama’s HigherGround Productions. Crip Camp spans the years from the late 1960s to the present, including many videos, photographs and discussions of the Disability Civil Rights Movement and the 504 Demonstrations. Crip Camp interviewed 14 disability activists, most of whom were campers and or staff members at Camp Jened before it closed in 1977. This film shows the struggles people with disabilities faced to achieve our civil rights.

Before going to Camp Jened, I was a camper at Camp Oakhurst. I knew of many other camps for people with disabilities. Except for Camp Jened, these camps had beautiful, well-maintained grounds. Most of the counselors were young college students who wanted to help people less fortunate have a good summer experience. Counselors had a room separate from where campers slept. Activities were always well planned, and schedules strictly followed. People had close relationships at camp, but they ended when people returned home.

Camp Jened was very different. The grounds were shabby. Water came into the cabins through the ceilings when it rained. There were many days when there was no hot water. Many of the staff were former campers. Most workers were hippies of the Woodstock Era and conscientious objectors of the Vietnam War. Campers and staff were all there to have fun together as equals. Activity schedules were made but loosely followed. After evening activity, campers went with their girlfriend or boyfriend unaccompanied by a counselor. If you have any doubts about what we did, watch the film. Relationships formed at camp often lasted for decades. Many still exist.

The free, open, equitable and loving environment found at Camp Jened undoubtedly is why so many of us went on to have our own families and successful careers in academia, businesses, and government, as well as become civil rights advocates. The shabby, run-down campus taught me that I don’t need to be overprotected or handled with kid gloves. Being one of the most conservative people at camp, I had many heated political discussions. I learned that regardless of political views, injustice to anyone is an injustice to everyone. We all must combat prejudices any way we can. Throughout my childhood, my body caused me physical and emotional pain. At Camp Jened, I got to see that everybody is beautiful and that my body can be pleasurable to other people and me.

I urge you to watch Crip Camp. Afterward, please let me know what you think of it. Nowadays, does a place such as Camp Jened exist? If not, where do young people with disabilities learn the many life lessons the Camp offered? Have fun!”

Previous: Raise Your Voice to Save Disabled Lives