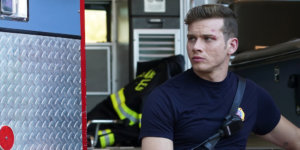 Los Angeles, California, Oct. 28 – Fox’s 9-1-1 is no stranger to disability representation, introducing a recurring character with a disability last season, working to normalize the inclusion of people with disabilities in all areas of society. This season continues this trend – both with promoting Gavin McHugh, who has cerebral palsy and plays Christopher Diaz to a series regular, and adding additional storylines relating to disability.

During a routine fire drill in Episode 4, “Triggers,” a businessman has an epileptic seizure, most likely due to the strobing lights and loud sounds of the drill. When he falls, it causes a domino effect, with dozens of individuals falling down the stairway. As he is being put into the ambulance a lawyer from the building approaches him. “I have reason to believe this building is not in compliance with the Americans with Disabilities Act,” he says. “There are several legal actions you may wish to consider.”

At the same time, Buck (Oliver Stark), who had been fighting to regain his firefighting certification following his accident and blood clots from pushing himself to get back to work, considers legal action as well. Being put on “light duty,” Buck was working as a fire inspector during the drill and was brought in to speak to the lawyer about the fire department’s response. When he feels that he is being replaced at the firehouse, Buck decides to sue the city, the Los Angeles Fire Department and his supervisor Bobby for wrongful termination. Buck had been diagnosed with a “chronic medical condition,” and his lawyer attacks other members of the department, including Bobby’s alcoholism, described as a “chronic brain disease,” and others, who returned to work without incident. Buck rejects the offer of millions of dollars, determined to get his job back instead. “I didn’t do this for money,” Buck tells his lawyer. “I did this to go back to doing what I love.” Ultimately, Bobby reinstates Buck due the potential backlash the city might face due to his lawsuit. When individuals acquire a disability while in the workforce, there is a tendency to believe someone’s ability to do the job is reduced. Buck is fighting that perception.

Another storyline in Episode 5, “Rage,” Christopher’s father Eddie (Ryan Anthony Guzman) gets into a fight with a man who gets angry with Eddie for parking in a disability spot. Eddie has just dropped off his son, who has cerebral palsy and walks with mobility aids, at a birthday party, and his use of the spot was valid. The resulting argument and fight, however, points to the real-life scenario that individuals with nonvisible disabilities are often harassed for parking in disability parking spots by others who assume that they do not have a disability.

The issues of returning to work following an injury or disability and being able to legally park in a disability parking spot without being harassed by others based on incorrect assumptions are common occurrences for individuals with disabilities. Seeing these scenarios on primetime TV goes a long way in educating viewers.

Next: Gov. Whitmer Focuses on Michiganders with “invisible disabilities” in October Proclamation