Washington, D.C., August 22 – Entertainment leaders convened at RespectAbility’s 2019 Capitol Hill Summit last month to discuss how they are working to change the media’s portrayal of people with disabilities. The panel featured moderator Jonathan Murray, reality TV pioneer, and panelists Nasreen Alkhateeb, Candace Cable and Teresa Hammond, with a video greeting by the creators of this summer’s breakthrough hit The Peanut Butter Falcon.

The panel opened with remarks from Hammond, Chief Marketing & Communications Officer of GoNoodle. GoNoodle is a platform utilized in four out of five American classrooms as a classroom management tool. It features a variety of characters, called champs, including the newest addition, Flash Bolton.

Flash is a “lick trick personality, who is up for adventures. He rides a wheelchair and likes all things fast—planes, trains, cars.” RespectAbility played an instrumental part in creating Flash Bolton, who will make his debut this fall to the 14 million children using GoNoodle.

Cable, a self-advocate and 12-time Paralympic medalist, helped develop Flash. She discussed the process of developing an authentic character who uses a wheelchair. Cable acknowledged GoNoodle’s effort in this. She said GoNoodle’s willingness to learn and ask questions was “a great example of authenticity, willingness to try things, and engaging a community so that everyone’s included in this process to get it right.”

A Cultural Relevance, Urgency and Impact

Cable also discussed her journey as a nondisabled white female born in Southern California who had a spinal cord injury at 21 that left her paralyzed from the waist down. “I had a mindset in that moment that I was of no value, completely broken and would spend the rest of my life in an institution,” she said of her feelings after the injury.

These feelings were based on how society perceives people with disabilities. “We constantly have been put away, we’ve been destroyed and told we have no value,” Cable explained. “One of the exciting things about Hollywood, TV, movie, story, media, is that we have an opportunity with that to redefine disability.”

Cable talked about the importance of positively portraying disability, particularly now, because it has a “cultural relevance, and it has a cultural urgency, and it will have a cultural impact.”

The next panelist, award-winning director Nasreen Alkhateeb, discussed her journey as a filmmaker. She identifies as a multicultural woman of color, who is a survivor of assault and war, and is differently abled. She sustained a life-altering injury, which transformed her perspective when creating stories.

“Who has access to the story? Who benefits from hearing the story being told?” Alkhateeb asked. “Everyone here, including me, has privilege in some way. The question is, what are you doing with that privilege? And that’s a question I ask myself every time I’m sculpting a story.” 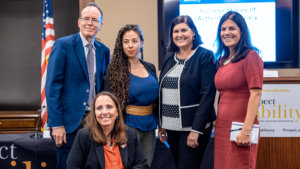 Recently, Alkhateeb finished a film about a blind, gay Jewish boy and his first crush. She said that she chose to be involved with this film, not because it involved a marginalized character, but because it depicted a universal dilemma as a truly universal dilemma. This narrative tells a story that everyone can relate to, and she wanted to be involved in “normalizing those stories.”

“We don’t need to have a long-winded backstory about the character,” she proclaimed. “It’s just a character. It’s just a person, just like everyone else.”

When asked what advice she would give to leaders in Hollywood, Alkhateeb said they should look at the content they are producing and who is producing it. She recommends telling stories from different perspectives to help tap into new audiences and add value that only a new perspective can bring.

Alkhateeb is a recent alumna of RespectAbility’s Summer Lab for Entertainment Professionals in Los Angeles. The program, which completed in July, involved a variety of Hollywood professionals, including newcomers and seasoned professionals. The goal of the program was to build the talent pipeline of professionals with disabilities working behind the camera in the media industry.

In the top 900 films, only 2.7 percent of speaking characters have a disability, Murray said, and most of those characters are not portrayed by actors with disabilities. One film combatting this statistic is The Peanut Butter Falcon, in theaters everywhere on August 23. Filmmakers Michael Schwartz and Tyler Nilsen addressed attendees via video message and encouraged them to attending a screening when it comes to their location.

Centered on a marginalized character – Zak (Zack Gottsagen), who has Down syndrome – this film normalizes Zak and his journey precisely because it is presented as a universal dilemma. Zak wants what many others his age want – a chance at pursuing his dreams and independence.

Jolie Carr is a senior at Samford University in Birmingham, where she is President of TEDxSamfordU, an organization that hosts TED talk-style events. She is also the VP of community relations for Samford’s chapter of the women’s fraternity Delta Delta Delta.

Next: Tips for parents of Jewish children with disabilities