This advice came from Romano’s many years as an advocate for people with disabilities, ranging from starting his own public relations firm, Romano & Associates (1988), being a member of the President’s Committee for People with Intellectual Disabilities (2006-2008), and serving as Assistant Secretary of Labor of the Office of Disability Employment Policy (ODEP, 2008-2009). Romano’s passion stems from being an individual with a disability himself. Romano is dyslexic and most recently has been diagnosed with cancer.

Being dyslexic created problems with finding a job for Romano because his resume had too many spelling errors even with a degree from NYU and post graduate work at Brown University. Romano understood how stigma affects disability and knew it could stop him from being hired, so he would not disclose his disability. 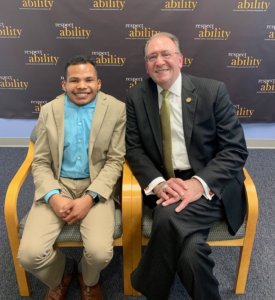 People with invisible disabilities often do not disclose having a disability according to Romano because they do not want to be marginalized. Romano acknowledged that he looks like a nondisabled white man with power and knew that might influence employers to hire him. But Romano is worried about the people with disabilities who cannot hide their disability and/or are not white males such as some of RespectAbility’s Fellows.

Romano added, “This group is the future, we need minds like yours because you know how to include disability into the narrative unlike many others.”

People with Disabilities Have Economic Power

Romano thinks in “units of green,” and believes that for every $1 spent, 10 cents should be for integrating people with disabilities into employment (including battling stigma). Gaining employment can lead to gaining economic independence and the pursuit of higher education; it’s like a ripple effect for people with disabilities, and it is a critical piece to success.

Disability is a Civil Rights Issue

Section 504 of the Rehabilitation Act prohibits discrimination against people with disabilities in any program or activity that receives federal funding, and the American with Disabilities Act prohibits discrimination based on disability in areas of public/private life. Romano thinks RespectAbility and its National Leadership Fellowship program could be a catalyst to change the minds of modern-day employers. The National Leadership program aims to recruit students with disabilities who want to become advocates in the disability community.

Through Romano’s talk, RespectAbility’s Fellows found out that the fight for rights for people with disabilities is not over. Advocacy is a never-ending job as it takes those who are willing to endlessly educate to get the job done.

Justin Tapp is the Disability Studies Student Organization’s treasurer at the University of Toledo. He will graduate in May of 2019 with his bachelor’s degree in Disability Studies and Political Science. He was born with two congenital diseases: klippel-feil syndrome and scoliosis.

Previous: Overcoming Shame and Stigma of Mental Illness Through Film

Next: Webinar: Equity in the Center – Race, Equity and Disability