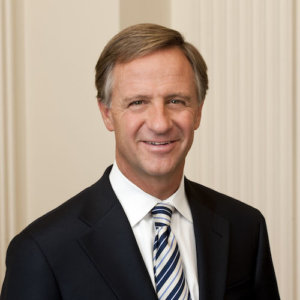 “People with disabilities in Tennessee share with the state’s other six million residents the desire to achieve personal success and economic self-sufficiency through meaningful work in the communities,” said Gov. Haslam in the proclamation. “Every person, regardless of ability, has valuable strengths, infinite capacity to learn, and the potential to make important contributions to their local communities.”

Activities throughout the month should reflect the message that people with and without disabilities share the same workplace goals and values. According to Gov. Haslam, these values and goals are “embracing systems change and achieving several milestones resulting in jobs in community settings at competitive wages.” 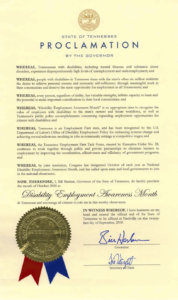 An annual celebration, National Disability Employment Awareness Month (NDEAM) is dedicated to raising awareness about disability employment issues and celebrating the incredible contributions of people with disabilities. In total, there are 558,852 working-age people living with disabilities in Tennessee. That total includes people who are blind or deaf or have other visible conditions such as spinal cord injuries, as well as people with invisible disabilities including learning disabilities, mental health or Autism.

Among them, 174,370, or 31.2 percent have jobs. According to RespectAbility, a nonpartisan nonprofit organization that works to fight stigmas and advance opportunities for people with disabilities, Tennessee ranks 45th compared to the rest of the country. It is great news for the state that employment has risen, and this month presents the opportunity for even more growth.

Next: Nevada Gov. Brian Sandoval Renews his Commitment to More Jobs for People with Disabilities