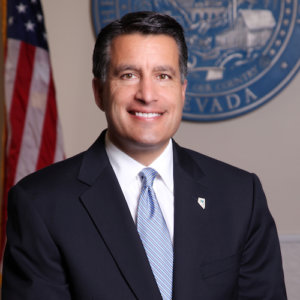 “Those with disabilities are entitled to full inclusion in our communities,” writes Sandoval in his proclamation. “All persons, regardless of their conditions or abilities, should have equal access and equal opportunity in the workplace.”

This proclamation affirms the legacy of Sandoval’s past efforts on jobs for Nevadans with disabilities. Throughout his time in office, he has worked with major employers such as Starbucks on innovative employment strategies to empower job seekers with disabilities. 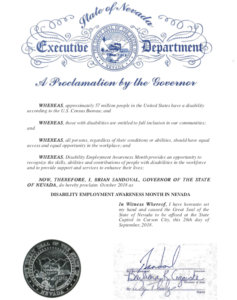 In total, there are 198,826 working-age people with disabilities living in Nevada. That total includes people who are blind or deaf or have other visible conditions such as spinal cord injuries, as well as people with invisible disabilities including learning disabilities, mental health or Autism.

Of that number, 83,453 people have jobs, giving the state a disability employment rate of 46 percent. According to RespectAbility, a nonpartisan nonprofit organization that works to fight stigmas and advance opportunities for people with disabilities, Nevada ranks 13th compared to the rest of the country.

When people with disabilities are given access to the workforce, both the individual and the employers benefit. People with disabilities can bring new talents and ways of thinking to the table. Companies such as JP Morgan Chase, Coca-Cola, UPS, IBM, Starbucks and Walgreens practice inclusive hiring and have had great success. As an employer, it is important to consider these talents and advantages when hiring workers.

“People with disabilities bring unique characteristics and talents to Nevada’s economy,” adds Jennifer Laszlo Mizrahi, President of RespectAbility. “They can work in hospitals and hotels, or apply their talents to develop computer software and website design. There are no limits to what they can do.”