Results of New National Poll of Voters with and without Disabilities

This is the first poll to cover a number of new issues from a disability perspective, including the views of the disability community on the NRA, pro-life groups, President Trump, healthcare, values and other issues. 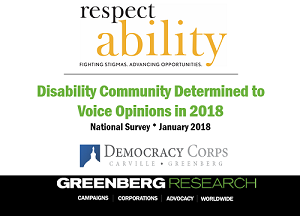 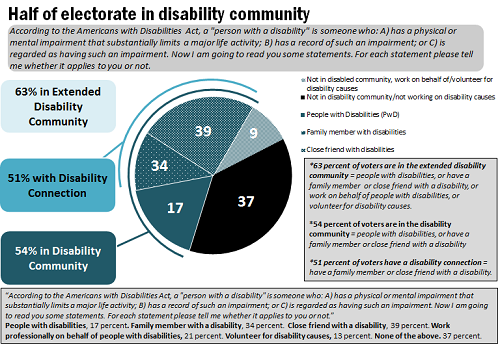 People with disabilities, 17 percent of voters, are 9 percent more likely to be extremely interested in voting in 2018 than those outside the extended disability community. While there are key issues on which the majority aligns with Democrats, such as support for the ACA and opposition to the new tax cuts, they are varied and dynamic in their political affiliation. Majorities in the extended disability community and outside of it agree that the country is on the “wrong track” (55 and 56 percent wrong track, respectively). 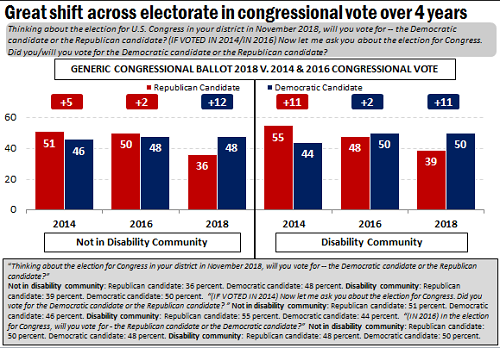 There has been a significant shift in voting patterns of this swing demographic over the past four years. In 2014, a 55 percent majority of voters with disabilities or a disability connection voted for Republican candidates for congress while in 2018, only 39 percent plan to vote for the Republican candidate. This shift is even greater than 17-point shift towards Democrats among voters that are not in the disability community.

Only one-in-three working-age Americans with a disability has a job, despite the fact that studies show that 70 percent of the 21-million working-age people with disabilities are striving for work. More than 78 percent of non-disabled Americans are employed. 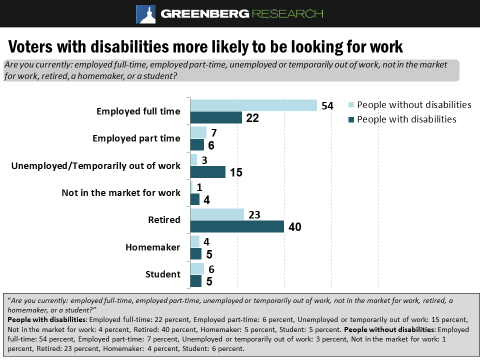 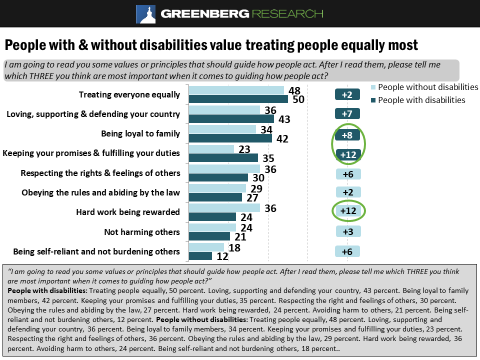 Another bi-partisan poll from October 2016 of 900 likely 2016 voters found overwhelming support for a series of policies to advance opportunities for people with disabilities. More than 8 out of 10 voters are more likely to support a candidate who prioritizes “ensuring that children with disabilities get the education and training they need to succeed;” 61 percent are much more likely to support the candidate. 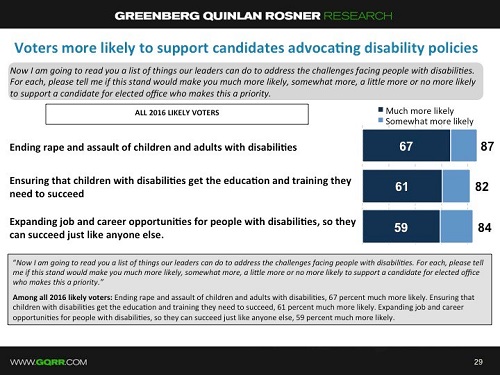 This national phone survey took place from January 6-11, 2018 among 1,000 registered voters from a voter file sample. Data shown in this deck is among all registered voters unless otherwise noted. Margin of error for the full sample is +/-3.1 percentage points at the 95 percent confidence level. Of the 1,000 respondents, 66 percent were interviewed via cell phone in order to accurately sample the American electorate.

***The October 2016 survey was conducted by Democratic polling firm Greenberg Quinlan Rosner and Republican polling firm North Star Opinion Research by phone of 900 likely 2016 voters from October 21 through October 24, 2016. Likely voters were determined based on stated intention of voting in 2016, and vote history in 2012 and 2014. Margin of error for the full sample is +/-3.27 percentage points at the 95 percent confidence level. Of the 900 respondents, 65 percent were interviewed via cell phone in order to accurately sample the American electorate.

There will be a full briefing via teleconference/web

Live captioning will be provided

Stanley Greenberg is a New York Times best-selling author and polling adviser to presidents, prime ministers and CEOs globally and right now is conducting deep research in more than a dozen countries. He was the senior pollster for President Bill Clinton and Vice President Al Gore, British Prime Minister Tony Blair, and President Nelson Mandela. Greenberg’s corporate clients include Boeing, BP, Microsoft, and other global companies. Greenberg was inducted into the American Association of Political Consultants’ “Hall of Fame.” He has been described as “the father of modern polling techniques,” “the De Niro of all political consultants,” and “an unrivaled international ‘guru.'” Esquire Magazine named him one of the most important people of the 21st century. Republican pollster Frank Luntz says, “Stan Greenberg scares the hell out of me. He doesn’t just have a finger on the people’s pulse; he’s got an IV injected into it. He’s the best.” He is always on call because his research is relevant, innovative and deep, whether it is exploring the new economy, climate change, new gender roles, political reform, or the hegemonic role of millennials.

Previous: One Woman with Disabilities Fights for Freedom For All

Next: Steve Bartlett: Becoming a Better Advocate – Someone Who’s Been There