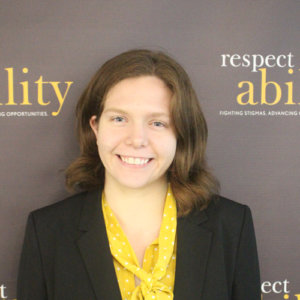 Maher’s drive to advocate for people with disabilities started at a young age when she realized that the realities of her mother’s students in special education and of her uncle, a person with autism, did not match up to the portrayals of individuals with disabilities in mainstream Hollywood.

Previously, Maher has worked in collaboration with Catholic Charities’ group homes for adults with disabilities to hold a Variety Show at her high school from 2011-2015. Each year, the show included one song-and-dance performance for each group home on Long Island, and one finale where all the high school students and the adults from the group homes would perform together, which related to the theme of that given year’s show.

Maher is in her third year at American University. She is pursuing a bachelor’s degree in print journalism with a double-minor in international service and health promotion. Maher has been a Peer Wellness Educator for the past year at American University. Through participating in identity workshops as a Peer Wellness Educator, Maher has learned to be more conscious of people with disabilities on her campus, and how the way that we occupy space and use language can have an impact on how they navigate their identity.